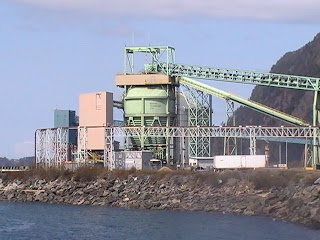 While the Federal Government continues on with its process of sorting out the real intent from the tire kickers, a bit of a window into the world of industrial property valuations has been revealed in Las Vegas, Nevada.

From the Coaltrans Conference, a coal industry gathering in Las Vegas Nevada last week, came word that the financial return from the potential sale of Ridley Terminals could reach as much as 2 Billion dollars.

A story in an industrial newsletter, Platts, outlines some of the talking points from Ridley Officials at the Las Vegas conference, including what was called an impromptu analysis from Matt LaFiandra, a Senior project manager for Ridley Terminals.

LaFiandra represented Ridley Terminals as part of a 2011 trade trip to China, which featured a number of local politicians and industrial officials seeking to expand contacts with Chinese officials.

In Las Vegas he provided a bit of an overview of the current state of developments with the privatization plans for the North Coast coal terminal.

Providing the caveat of "I don't know what Ridley will sell for..." LaFiandra used the most recent capitalization of Westshore Terminals in Vancouver as a template for those in attendance to consider. Westshore's value was set at more than 2.1 Billion dollars in recent weeks, a figure that LaFiandra suggested was a comparison for those watching the Ridley sale to consider.

He also outlined some of the potential interest in Ridley Terminals as the bidding process continues on, with a consortium of coal producers, a consortium of buyers, a large private equity group and a terminal operations group all rumoured to have made their intentions known regarding a potential purchase of the Terminal.

You can review the take away that Platts gained from the Vegas conference here.

Ridley Terminal officials played a fairly significant role at the Coaltrans conference, which  offered up a number of coal producers to discuss the emerging "Coal Export Hub" that the West Coast of
North America is offering.

The event agenda provided a number of discussion groups and presentations on that theme, including a presentation from Ridley Terminals President George Dorsey, who provided the overview on the privatisation of Ridley as part of the Day One sessions.

The Ridley Terminals privatization plans were announced by the Federal Government in December of 2012, a decision that has provided for much in the way of interest on the local front, with many in the community, including the City of Prince Rupert, expressing their concern over the privatization plans.

You can review items of note on the privatization plans as well as general interest items about Ridley Terminals from our archives.
Posted by . at 9:46 AM