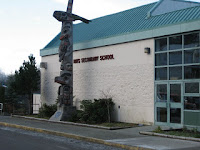 A much anticipated program for the Fall of 2013 received a major boost on Wednesday, as the Prince Rupert Port Authority named the Trades Training Project, as the latest recipient of funding from the Port's Community Investment Fund.

The announcement was made at the Port's Annual Public Meeting, a 100,000 dollar donation from the Port's Community Investment Fund, that will be added to the money and support already in place from Ridley Terminals, Northwest Community College and School District 52.


"The Port Authority is excited to have three of our community partners collaborating on these much-needed educational opportunities,"... "We are happy to make this contribution that will allow local people to pursue careers in their own communities, likely supporting the gateway industry the Port Authority and our partners are working hard to grow in a sustainable manner." --  Don Krusel, President and CEO of the Prince Rupert Port Authority, sharing announcing the Port Authority stake in trades training on the North Coast.


You can review the full media release from the Port Authority here.

With anticipated growth in the trades forecast for the North Coast the three community partners have embarked in a program to deliver two key trade foundations, the first of which is the Millwright Foundations program which will start with the return to school of September 2013.

That program will be followed by the start of a program for Industrial Electrical Foundation that will begin in February of 2014.

Those interested in the program can contact Charles Hays Secondary or Northwest Community College for further details on how to apply and when and where sessions take place.

The announcement of the program has been well received throughout the community, the project offers the opportunity for local residents to receive training in the trades and a foundation for future employment in the Northwest.