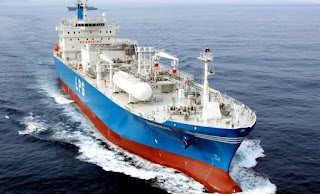 When the topic of energy exports out of the North Coast are mentioned, the two main categories of late have involved oil shipments and LNG development, with Prince Rupert seemingly poised to capitalize on energy sources as the province seeks to expand it's trade potential to Asia.

Now proponents of a third version of energy production, Liquefied Petroleum Gas, are seeking to open up Asian markets and they too have an eye of the possibilities of the North Coast.

As we mentioned on the blog back in March, the LPG industry has been quietly looking at setting up shop on the North Coast, with interest apparently heating up a bit of late with further inquiries made with the Prince Rupert Port Authority.

An item in the Globe and Mail last week highlighted that increased interest in the North Coast, especially considering that for the most part, the product for export moves to port waters by way of rail car, which could put LPG on the CN rail network into the Northwest.

In the Globe article the Port's Vice President of trade development, Shaun Stevenson outlined some of the interest that the Port has seen. Which at the moment would seem to resemble the same early rumblings that led to the LNG developments in recent years.

“We’ve seen the same kind of interest that we saw originally in LNG [liquefied natural gas], as you see the same market shifts happening where the big focus is toward Asia,”

And while the financial prospects for LPG development are a mere shadow of the potential investment that the LNG plans offer up, the LPG proposal might make a helpful diversification for the local economy and provide yet another step in further development of the region's industrial base.

The project cost associated with building an LPG terminal could reach 500 million to build,  far less of the massive scale of development that the LNG talk is providing for, but still a significant investment and one that we imagine offers up another possible addition to the Prince Rupert Port Authority portfolio.

Of key importance to any LPG Development is the reliance on the rail infrastructure, and when you consider the infrastructure already in place and the current work on the Rail Utility corridor on Ridley Island, setting up a Terminal at Prince Rupert would seem to be natural fit for the industry looking to expand to Asia.

You can review the full Globe article here.

Some background on what the Liquefied Petroleum Gas Industry is all about can be examined here and here.
Posted by . at 10:24 AM