The protest which began at 9 AM consisted of crab fishermen  and their supporters, expressing their concerns over that announcement, with speeches and discussions with passers by taking place in front of the DFO building.

In a press release, the Area A Crab Fishermen's Association vowed "to shut down the DFO building in Prince Rupert on Friday, June 28 to protest the decision"

The Crab Association is seeking to have the DFO decision reversed.

Estimates had the crowd attending the protest to be numbered at around 40-50 or so participants.

Some Background on the events leading to today's protest can be found from this news release from the Area A crab organization.

Members of the RCMP were in attendance to keep a watch on developments.

At the time of this posting, the protest was still underway.

Update:  The CBC's Daybreak North's George Baker took to twitter with this snapshot of the morning protest. 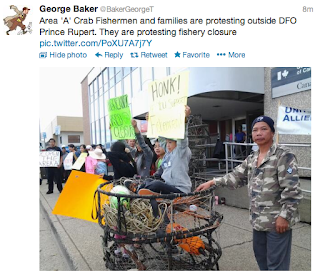 Further Media reports on the DFO decision and updates on today's protest can be found below: