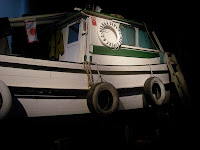 It's been a snapshot of North Coast life in Ottawa for years, but now, with renovations underway and an apparent change of direction in the focus of the Museum of Civilization, the North Coast exhibit Nishga Girl is returning home, though not without a bit of controversy.

The fishing vessel, designed and constructed by Jack Tasaka (one of over 200 that he built) has provided a glimpse into North Coast life on the national stage since 2002, a pleasant surprise for North Coast residents that may have made the trek to the Nation's Capital and visited the national museum in Gatineau, Quebec, across the river from Parliament Hill.

It had been donated to the Museum by Chief Harry Nyce and his wife Deanna, at the time it was considered to be a major acquisition for the museum. 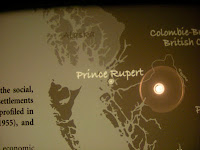 However, the Museum is apparently changing the focus of it's national display and no longer will be showcasing the Nishga Girl, a situation which as the Ottawa Citizen explained in a recent article came as quite a shock to Nyce, as well as historical buffs in the capital.

While there may still be a chance for a change of mind in Ottawa, (there is currently a bit of a debate raging about the decision) at the moment, it appears unlikely that the Nishga Girl will remain in the national capital. 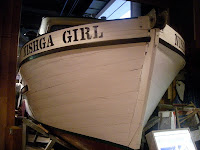 The Museum of Civilization in Ottawa is finalizing the details and preparing to ship the Nishga Girl on its westbound journey, its final destination to be the North Pacific Cannery Historical Site Museum in Port Edward.

A journey which will bring the Nishga Girl  back to the coast where it once sailed and where will remain on permanent display at the Port Edward site.

You can review the fascinating details (and drama) of the fate of the Nishga Girl from this article in the Ottawa Citizen.

Some background on the Nishga Girl and her time at the Museum of Civilization can be found below.

CFTK picked up the theme of the Nisgha Girl with this report posted to their website on June 14th.

The June 19th edition of the Northern View offered this review of the Nishga'a Girl story.
Posted by . at 9:02 AM

Email ThisBlogThis!Share to TwitterShare to FacebookShare to Pinterest
Labels: Nishga Girl returns to the North Coast