The Councillor steps aside 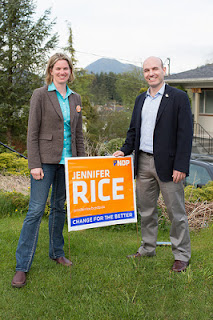 Councillor Jennifer Rice submitted her resignation by letter on Monday evening, stepping down from Prince Rupert City Council after almost two years of service to the course of civic governance.

As we've catalogued on the blog in recent months, the prospect of her stepping down from Council has been a discussion point going back to the days of her entry into the recent provincial election run up.

Should She stay, or should she go...

Ms. Rice's success over PRDTA President Joanne Larson, secured her nomination for the NDP and from that point on, it would seem she was on a clock, with only the end of her running time on council to be determined.

The topic of Ms. Rice's future only intensified with her successful quest for provincial office. With many offering up their thoughts on her future with her pending decision to be discussed, debated and/or argued in any number of forums around the city.

You can review the full archive of the recent election campaign here.

Monday night, the newly elected MLA for the North Coast, provided the post script to her Council days (though she wasn't on hand to deliver it personally).

You can review the announcement to Council from their video website, the Councillor's farewell was delivered by City Administrator Robert Grodecki, at Monday's session. (see the notice at the 21:30 minute mark)

Councillor Carlick-Perason followed up the announcement, by providing her tribute to the departing Councillor, a sentiment echoed by the Acting Mayor for the night Nelson Kinney.

Not surprisingly, the Northern View was the first of the media outlets in the city to herald her decision.

Over the last six months or so, the Northern View has been the most adamant on the theme that the Councillor had to step aside, at times with a fascination that bordered on the fanatical.

The tone of the editorials from the publisher Todd Hamilton in particular seem to have provided a sub plot to the debate as Rice supporters (and even the MLA  elect herself), offered up the rebuttal's to Mr. Hamilton's at times rather incendiary polemics.

Her departure now provides Prince Rupert City Council with a decision to make, as they work out the requirements and cost out the prospect of a by election to fill her seat.

As they consider that decision to come, they may wish to include a referendum on some outstanding civic issues, including the recently deferred Emergency Services building.

Or perhaps they will take guidance from the City of Golden which at the moment is considering reducing the number of councillors that sit on that City's Council, dropping the number from six to four.

That is a suggestion that we imagine that could fall under the "working smarter" mantra of council of late and a recommendation that might make for an interesting discussion around the Council chamber, but perhaps is one that is most likely for a later date.

The Northern View article on Councillor Rice's departure can be found here.

Other Media reports on her departure can be found below:

And for your archival purposes, (the Best of?) the Councillor must go contributions can be found below.

Email ThisBlogThis!Share to TwitterShare to FacebookShare to Pinterest
Labels: Councillor Rice steps down from council