Changing the "S" on the local grocery store? 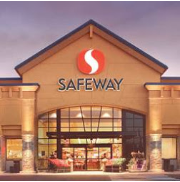 Change is coming to the North Coast grocery industry, with word yesterday that Canada Safeway will soon be joining the Sobey's family of companies.

In a major shake up of the Canadian Grocery scene, the American owned chain sold off it's Western Canadian assets on Wednesday in a massive 5.8 Billion dollar deal.

As we outlined on the blog back in early January, rumblings of a shake up in the grocery industry had been making the rounds for a while now, with Canada Safeway destined at times for any number of suitors as the Canadian grocery landscape shifted with the arrival of Wal Marts, Targets and other large volume distributors.

At that time, the thought was that the Loblaw's chain or Overwaitea might be the most likely to scoop up the Safeway chain, at that time Sobeys was mentioned, though almost in passing as the Eastern based chain was listed lower on the prospects list.

The bid from Sobey's was described as an un-solicited offer by Robert Edwards, Safeway's Chief Executive. The closure of the transaction is expected to be completed by the fall of 2013.

Details of the Sobeys acquisition were provided in a lengthy media release which provided an overview and some background on the deal between the two companies. (see here)

There are currently 213 stores with the Safeway brand from Thunder Bay through to Prince Rupert, which will make Sobey's a Nova Scotia based chain truly a Cross Canada operation, as they expand their presence into territories previously unknown.

It was not disclosed on Wednesday if the Sobey's "S" will replace the Safeway version once the takeover is complete, or if the iconic Canada Safeway brand will remain on the Western Canadian storefronts.

Also not revealed in yesterday's developments was if the takeover would result in job loss for Safeway employees, though that is most likely only a concern in those communities where the two companies operate competing stores in close proximity.

The key to the deal for Sobeys was apparently the immediate footprint that the company will receive in four major Canadian cities, Vancouver, Calgary, Edmonton and Winnipeg, locations which make up more than 60 per cent of Safeway's operations.

Safeway operates three stores in the Northwest, with locations in Prince Rupert, Smithers and Terrace.

The UFCW, the union that represents the majority of Canada's commercial workers had no review or comment on the Safeway sale posted to their website as of yesterday.

The business deal was the major topic of the day on many of the nation's business portals, some of their reviews can be found below.