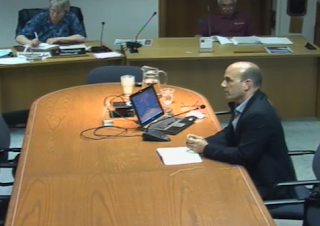 The topic of the sudden spurt of proposed energy projects for the North Coast has caught the attention not only of politicians on the local level, but has clearly created much interest at the Federal level as well.

Nathan Cullen, the NDP MP for Skeena-Bulkley Valley was in Prince Rupert this past week and has offered up some thoughts on the growing number of energy related projects announced for the North Coast, suggesting that the time may be here for a regional energy strategy.

He provided his points on the theme with this article for the Prince Rupert Northern View.

In it, he outlines that in his opinion, the best place to start the conversation on a strategy would be in the riding most impacted by recent development proposals.

Mr. Cullen who earlier this week appeared at Prince Rupert City Council, appears to have taken his notes from that council session and put them forward with a more definitive plan moving ahead.

At Monday's Council session, the MP heard from many of the city's councillors as to the overwhelming nature of the sudden rush of proposals for the region, leaving the city's elected representatives struggling it seems to cope with the load of work they believe is required of them on the development files.

As we reviewed on the blog on June 13th, Prince Rupert City Council expressed their growing concern at that work load, going so far as to recommend that the City write to both federal and provincial officials seeking assistance.

On that theme, Council members took advantage of his appearance at Council and inquired to the MP as to whether there was any Federal funding available at this time to help lessen their load, seeking to hire someone who could help shepherd Council through the growing file of projects and proposals.

Mr. Cullen on Monday advised that he did not know of any particular funding available at this time, however he did say he would investigate that prospect further for council.

He did however provide some advice to Prince Rupert Council and to those other municipalities that are facing a sudden rush of development proposals. Mr. Cullen recommended that communities along the Highway 16 corridor work together to gain and share information on development in the region.

He also believes that it would be a helpful decision to join in with area First Nations in the quest for more information and oversight on developments in the Northwest.

Overall, his thirty minute presentation touched on many themes related to the current burst of energy related projects for the North Coast, providing his interpretation of Federal intent on the issues and offering up the various suggestions he believes would best suit communities from Haida Gwaii, inland to the Bulkley Valley.