Council to explore Housing issues in the fall 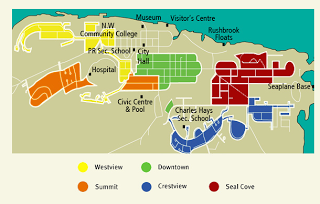 It started as a comment backed onto a variance permit request and by the end of the conversation Prince Rupert City Council was ruminating on the prospect of future population growth and the prospect that it may have on our housing supply in the city.

Councillor Thorkelson  carried the majority of that conversation outlining some of her thoughts on the need for Council to hold a workshop in the fall or next spring to review where and what kind of housing and apartment development it would like to see developed for the city.

She offered comment on the current nature of the vacancy rate, which is low with rents on the rise and expressed the thought that as the city's population increases (perhaps back to 18,000, though she isn't apparently thrilled at the idea of it reaching 50,000) the need for housing will need to be addressed.

She highlighted the fact that there are a lot of older properties in the community and council should plan ahead for the prospect gentrification and associated issues from it.

She asked council to begin to think about what kind of housing they would wish to see in the community. Examining as to the kind of mix and where different housing options, such as high rise development or row housing could be located.

The City planner advised that he had already received some half dozen inquiries over the last six months about potential housing prospects in the city, but no further movement has taken place from those inquiries.

Councillor Thorkelson's synopsis of the housing situation can be found from the 17 minute to 21 minute mark of the Council video archive.
Posted by . at 9:37 AM

Email ThisBlogThis!Share to TwitterShare to FacebookShare to Pinterest
Labels: Council to look at housing issues in the fall July 2013