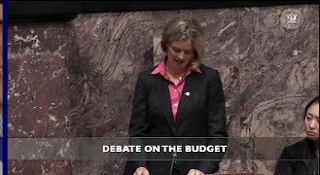 Jennifer Rice, the newly elected MLA for the North Coast made her debut speech in the Legislature on Wednesday, July 3rd, providing for many of the themes that she is best know for in the region and perhaps setting the tone for some of her key interests as she sits on the back benches of the NDP side of the legislature.

She opened up her address to the Legislature Wednesday, with a look back at her dreams as a child and how they shaped her background and ambitions.

She took time in her opening remarks to thank those that worked on her campaign, recognizing the work of those around the North Coast that assisted her on her success towards her seat in  Victoria.

Included in that list were the leader of the NDP Adrian Dix, former MLA Gary Coons, as well as her campaign worker James McNish and her mother, Yvele Paquet who travelled across country to join her campaign and spent hours working on her behalf through the election day run up.

As for the issues of note for her opening review, the nature of the Great Bear Rainforest which she referenced a number of times in her address were high among her points of consideration.

She mentioned the size of the riding and unique travel requirements that are required to reach all corners of it, towards that distance and isolation she touched on her concerns over ferry costs as key among the issues that she brings to Victoria from her constituents.

The fishing industry held a main centrepiece of her debut speech, the coastal forestry and agriculture also mentioned during her commentary, she outlined the growth of the Port of Prince Rupert and what advantages it offers to the economy in the local community.

She reviewed some of the current port related developments in the region and then suggested that the Port could pay more of its fair share to the community.

Carrying on her theme of a more fair share to that of the Provincial government, advising that she will be watching for the much promised Northern Dividend that the provincial Liberal government has promised.

She offered up some lighthearted remarks about our precipitation levels and apparent fondness for tanning salons.

She then spoke to the LNG industry, suggesting that the current industrial base should not be abandoned to the new lure of LNG, hoping for a more diversified economy for the North Coast. Expressing a cautionary note over putting all our eggs in an LNG basket.

Not surprisingly she used some of her time to speak to the Enbridge Northern Gatreway pipeline, mentioning many of her past points on the issue, calling to similarities between Cordova, Alaska and the Exxon Valdez spill and what we could take as cautionary points from that event.

She outlined her thoughts on the importance of BC Ferries to the region, while drawing the Legislatures attention to the high cost of Ferry transportation on the North Coast and the impact that those costs have on families on Haida Gwaii.

She spoke to the need to reach out to younger residents of the province, to make them more engaged in the political process.

On education, she outlined the nature of student debt and the need for more attention to post secondary education in the province to address the challenges ahead for them.

One of her final thoughts revolved about the need for more attention to the health care concerns faced by senior citizens across the North Coast and attacked the Liberal government on its rhetoric on health care.

She addressed some of her concerns over the province's handling of  the Aboriginal education file,  accusing the Liberal government of lowering the bar for academic achievement, rather than addressing the key issues. Suggesting that they are more interested in photo ops, contracts and in looking good, but not doing the right thing.

She wrapped up the speech by expressing her honour in representing the Great Bear Rainforest and for the unheard voices in the region.

You can review her entire speech from the preliminary Legislature minutes (known as the Blues) for Wednesday, July 3rd (see here) MLA Rice's contribution to the discussion can be found at the 17:35 mark on the right hand side of the home page. (html provides for the entire debate of the day, the index offers up a quick link to Ms. Rice's contribution by clicking on the R)

You can view her speech from the Legislature TV archives,  select House Video , again this time using the video player, fast forward to the 17:35 mark, MLA Rice's speech goes until 17:50
Posted by . at 9:03 AM