The 2013 fishing season is looking to be one to feature more controversy as the Department of Fisheries and Oceans outlined on Thursday that returns of salmon so far suggest that there may not be a commercial season for those that fish the Skeena.

The announcement from DFO will add to a season of frustration for the local commercial fishery, an industry which has already had two flash point incidents in recent months between fishers and DFO.

The latest news from DFO came about with the release of early findings of the salmon returns for 2013,  and while the Nass River is providing for positive returns for this time of the year, the main thrust of the DFO announcement was based on early returns on the Skeena River.

Data that suggest that only between 600 to 800 thousand Sockeye are anticipated to return, a significant shortfall for DFO to allow for a Commercial Salmon Fishery which requires a return of at least over 1 million before a fishery can go ahead.

DFO advised that the next ten days will prove important for those in the local fishery waiting for the go ahead to take to the water, though DFO officials don't seem particularly optimistic on the prospects.

Thursday's developments come in the wake of yet another controversy for the local office, last week Crab Fishermen took to the front of the DFO building on Second Avenue West in protest over a DFO decision to close the Crab Fishery.

As we outlined on the blog earlier this year, controversy has been no stranger between DFO and local fishermen.  In May, both sides were engaged in a contentious discussion over the nature of information gathering while conducting a fishery.

That development in the fishery has already given MP Nathan Cullen cause to wonder if the Conservative Government isn't trying to destroy the commercial fishery on the North Coast.

A theme that brought a rebuttal from the Northcoast steelhead alliance, which doesn't quite share the MP's overall view of the situation he had focused his attention on at the time.

However, the latest moves from DFO in regard to a North Coast commercial fishery probably won't change Mr. Cullen's thoughts on the theme of the future of the commercial industry. 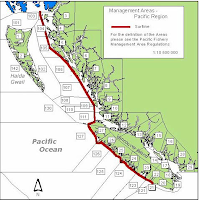 Mr. Cullen is not the only politician on the North Coast taking an interest in the latest developments,  in May Mayor Jack Mussallem and Councillor Joy Thorkelson (in her role as head of the local  office of the UFAWU) spoke out on behalf of the commercial fishers.

The two municipal politicians were back last week, standing in front of the DFO building during the crab fishery protest, Councillor Thorkelson and Mayor Mussallem offering their support for the Crab fishermen and their quarrel with DFO.

We imagine that with the latest announcement of a possible closure for the commercial salmon fleet this summer, they will be back to lend their support to the commercial fleet should that bit of foreboding come to pass in ten days time.

You can review more background on the North Coast fishery from our archive of Fishery related items
Posted by . at 7:13 AM

Email ThisBlogThis!Share to TwitterShare to FacebookShare to Pinterest
Labels: Commercial salmon fishery may be closed for the summer, July 2013