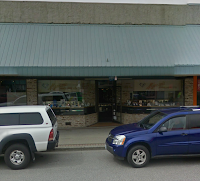 The signs went up this week in the windows of Manson's Jewellers, announcing another pending closure of a long time merchant on Third Avenue.

With retirement for the owners apparently beckoning, the notice that Manson's which first opened in 1945 is winding down their business operations, adds to the listings of vacant, or soon to be vacant store fronts along the one time bustling shopping district of the city.

Just two blocks east, the signs have heralded much the same fate for MacLean and Rudderham over the last few months, that merchant now in the last stages of its going out of business days.

In recent years a walk along Third Avenue highlights much of the struggle that local commercial operators have had over the last ten years, with many empty storefront testifying to the changing nature of economic fortunes in the past and the promise of the future not fully delivered yet.

In recent years, Manson's was one of three jewellers in the community, along with Cook's and Harris and Wick. All stores that were "go to" destination for any number of events, from weddings and baptisms, to graduation and Mother's or Father's Day.

Many a local awards ceremony has featured a plaque from the Third Avenue store, a family owned business that found its place in the community for the last sixty eight years.

They all have been unusual in their longevity as local businesses, being in an era of chain stores and discount operators. Yet in the jewelry business, the three for the most part had the market to their own, with customer loyalty and local service a key to the success.

There will be no shortage of memories shared by staff, owners and customers alike over the many years of service to the community that Manson's provided.

The closure is anticipated to arrive before the end of the year, highlighting the end of another era of Prince Rupert's commercial past.

You can review developments in the region's commercial sector from our archive page here.