Not millions, but a nice sum to tide one over through the summer 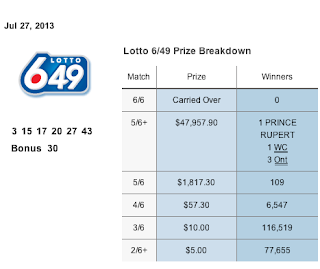 Somewhere in Prince Rupert a local 649 player, (or someone who purchased their ticket here) is holding a ticket that will make the end of summer a little bit more enjoyable.

While not in the millions of dollars, a Prince Rupert purchased ticket will provide for one of five lotto players to have won close to 50,000 dollars in last night's 649 draw.

The lucky ticket purchased in the city had five out of six numbers and the bonus number, joining players in Ontario and one other in Western Canada to a payday of 47,957.90

A nice little sum of money that may provide for a dandy end of summer trip, though we imagine, while they will enjoy their win fall, they like the other four players are wondering what if....  that other number dropped.

You can review the winning numbers from the BC Lotteries page
Posted by . at 9:29 AM