Keep your eye on the Terminal gangway, just in case...

A cautionary tale for Rupertites as this cruise ship season gets underway, keep your camera handy (and your twitter feed alive) at all times, as it would appear that you never know who may dis-embark from a cruise ship when it makes a port call.

Our neighbours to the north in Ketchikan are still buzzing about the passenger manifest of last week when the Silver Shadow cruise ship arrived in that port.

Alerted by a tweet on Tuesday, residents of Ketchikan were on the look out for Mr. Spock. Hoping to bump into him as he made the tour of the attractions of Prince Rupert's sister city to the north.

Well, actually they were probably quite polite and gave Leonard Nimoy a bit of space, (pardon the pun) but still the prospect of the long time movie and Television actor wandering their streets did have the town talking. 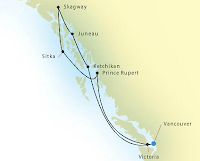 The public radio station KRBD in Ketchikan  took to the task of searching for Spock and was able to catch up to Nimoy and sought out his thoughts on his cruise and impressions of Alaska and Ketchikan, you can give a listen to the interview here.

While the Silver Shadow did not make Prince Rupert a port call this time around, the vessel will be in port on July 19th and again on the 29th.

So who knows, maybe wander down to the Northland Cruise Terminal with camera in hand.

You just never know who may wander off the vessel and bump into you in Cow Bay!

Email ThisBlogThis!Share to TwitterShare to FacebookShare to Pinterest
Labels: Celebrities on Alaska cruises