No target date yet for completion of 9th Avenue reconstruction project 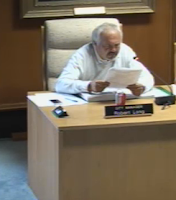 It made for a bit of an aside at Monday's city council meeting, but the short observation on the nature of the 9th Avenue reconstruction project won't be providing much relief to the long suffering residents of that portion of Prince Rupert.

9th Avenue East has of late become a much discussed stretch of road, where residents probably just want everyone to go away and to get their street back.

New City Manager Robert Long updated Council on the state of repairs to the long running project,  but could not provide Council with a final date for completion for the road project.

The reconstruction process has been an ongoing effort, since work first began in May of 2012.

It was a project first examined by council as one of a number of works items for the community back in September of 2011.

The original completion date had been set for the Spring of 2013, a time frame which appears to have been rather ambitious judging by the pace of repairs.

According to Mr. Long's review, complications with private property connections to the old servicing, would appear to be the main roadblock to completion of the road, though the nature of those concerns wasn't discussed in much depth on Monday night.

You can review Mr. Long's observations on the 9th Avenue East project through the City's Video Archive for July 8th , his discussion on the project can be found from the 29 to 30 minute mark of the council session.
Posted by . at 12:39 PM