The race to bring WestJet Encore to a Northwest airport is seemingly over, with word delivered today that the Western Canadian based airline will be flying out of the Terrace Airport.

The Northwest was shut out of the original destination sweepstakes earlier this year, when WestJet announced its new regional service, announcing 28 destinations across Canada.

Both Prince Rupert and Terrace airport officials made presentations last year, in the hope of luring the new regional carrier to one of the three gateways of the region.

The Terrace Standard jumped the gun on the announcement, posting an item on line early on Monday morning, an article which generated quite a bit of twitter buzz, before it was quickly taken down leading to a dead link to the paper's website.

Their enthusiasm was matched by the wider Black Press portal, which issued a twitter note to the WestJet welcoming, with a link that also led to the recently removed item.

CFNR joined in on the twitter frenzy over the WestJet mania with their own tweet, shortly before the official announcement, advising that the cost of flying would be 99 dollars, a cost that will be the introduction to WestJet service in the region. 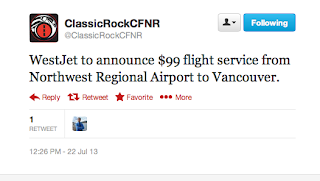 All of the suspense and false starts came to an end at 12:45, when WestJet issued their official and longer lasting announcement. 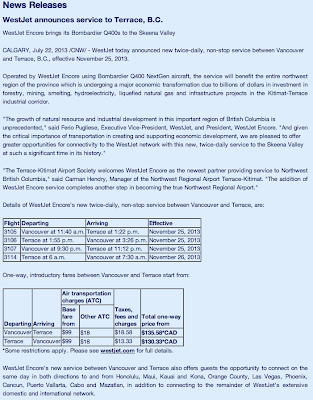 WestJet and Terrace Airport officials confirmed in their press release that the Bombardier Q400 NextGen turboprop service would indeed be including the Northwest on the travel destination and arrivals boards.

Service will start on November 25th and feature two flights a day to start, with that introductory fare of 99 dollars.

The rumour of a WestJet entry to the Terrace airport stretches back to last year, when local Terrace media outlets suggested that the airline had interest in that city's airport

WestJet began its Encore service in June a much anticipated arrival in the Canadian air passenger industry, one which many Canadians hope spurs on lower air fares to many destinations.

For Northwest residents, the arrival of WestJet provides one more travel option to Vancouver, though for Prince Rupert residents, that option will require a road trip inland to catch a flight.

The arrival of WestJet could and most likely will, have some impact on passenger levels going through YPR, the Prince Rupert airport, though most likely more so during the spring and summer months than in the winter.

You can review our past Air Transportation items from our archives.
Posted by . at 12:50 PM