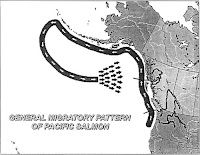 “BC fisheries have been severely curtailed and closed, because the run is looking so dismal, and First Nations along the Skeena River may be restricted in their food fishing. Yet the Alaskans have been hitting these fish just across the border,” -- Watershed Watch press release July 17

A British Columbia umbrella organization for conservation societies, Watershed Watch, has made note of the low expectations for returns on the Skeena River and pointed to just a few kilometres (miles for Alaskans) north of the A-B line as to where the problems may be.

As we outlined on the blog on July 5th, the Department of Fisheries and Oceans delivered dire news for the North Coast Fishery for this year, with word that returns of salmon so far on the Skeena this year, suggest that there may not be a commercial season for those that fish the North Coast.

In a Press release issued on July 17th, Watershed Watch, which is speaking for the SkeenaWild Conservation Society, Watershed Watch Salmon Society and Raincoast Conservation Foundation has offered up the allegation, that fishing practices by US based fishermen in South East Alaska is perhaps the most likely cause of the pending Skeena collapse.

Watershed Watch believes that US fishermen are catching Skeena bound salmon as part of a by catch of a fishery that is targeting Alaskan pink and chum salmon, suggesting that as much as 20 percent of the Skeena bound fish is ending up in Alaskan nets.

The organization has urged the Americans to put conservation ahead of short-term commercial interests, by allowing more Skeena bound sockeye to spawn, providing some advice for the Alaskans that they could still fish their more abundant local stocks, simply by moving their nets out of the open areas where the BC bound salmon are being caught.

In their press release they also called on the Federal Government to defend Canadian interests abroad, by doing more to protect vulnerable salmon runs from overfishing in US waters.

The Conservation society concerns over Alaska fishing practices, brings back some memories of the late 1990's when concerns over the state of the BC fishery led to drastic measures in Prince Rupert.

The most public of which  involved blocking transit of the Alaska Marine Highway System.

The concerns over the nature of returns of Canadian fish have been an ongoing topic since that time, with the Cohen Commission Report on the collapse of the Fraser River Stocks the most recent of government reviews of the Pacific Fishery.

The Cohen Commission held a session in Prince Rupert in September of 2010,  during those Cohen Commission sessions, there were a number of suggestions that the Justice Cohen should have expanded his review of the fishery to include the Northern Fishery as well.

With the growing concerns over the state of the Skeena Fishery, the calls for a full inquiry into the Northern BC fishery may soon grow louder.

Media items on the Watershed Watch concerns can be found below.

Email ThisBlogThis!Share to TwitterShare to FacebookShare to Pinterest
Labels: conservationists look at Alaska fishery as possible cause, Skeena sockeye concerns