The first public response from the Department of Fisheries and Oceans to the percolating crab fishery controversy on the North Coast, came by way of a letter to the editor of the Northern View, published on Wednesday.

In the letter, Mel Kotyk, the Director for the North Coast Area, took issue with the tone of a July 3rd article in the Northern View, suggesting that the writer, appears to have dismissed information from Fisheries and Oceans Canada regarding the topic of data collection and the crab fishery.

What's not clear from the letter, is if they are referring to the front page article from Shaun Thomas, or the editorial opinion piece from Editor Todd Hamilton. So to provide for a bit of background on the DFO concerns, below we have links to both items of interest on the theme.

In addition, DFO also expressed concerns over the observation in the paper that the closure came as a surprise to harvesters, calling that perception as inaccurate. As part of the response, Kotyk detailed how over the last ten years, as part of a management plan closures between March and August are not uncommon.

The controversial move to shut down the Crab fishery on the North Coast resulted in a crab fisherman protest two weeks ago and has been the subject of discussion at Prince Rupert City Council as well. 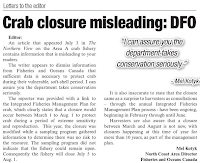 Our past item on the controversy can be found here.

The dispute between DFO and the crab industry has also caught the news cycle of other locations in British Columbia, some of their reviews can be found below.

For a larger overview on some of the issues of the North Coast fishery, check out our Fishing Industry Archive here.

Update: The Northern View provided coverage of the DFO concerns in their July 17 e edition.