Jobs, Jobs, did they mention Jobs?

The rather enthusiastic welcome by some, to the prospect of LNG development on the North Coast is proving to be a major generator of statistical review.

Making for much discussion as to just how many and what kind of employment prospects could soon be available, if and/or when, some of the many proposed LNG plants make their appearance on the north coast  shoreline.

A report issued this week highlights the oncoming wave of potential job opportunities tied into the development of LNG infrastructure, though for a good many of the jobs some form of previous training and in some cases, specialized training will be required to step into the opening day lineup.

The findings are based on the working assumption that five LNG projects will gain eventual approval in the province.

The Report "B. C. Natural Gas Workforce Strategy and Action Plan" suggests that more than 75,000 full time workers will be required for the Labour Force related to LNG development and processing. 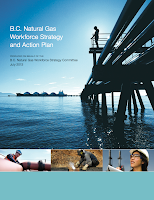 Based on the prospect of those five projects, the breakdown on employment prospects is as follows.

With such a surge of job opportunities anticipated by the provincial government, staffing positions and providing training will seemingly be a key aspect of future development.

Towards that the report calls for co-ordination with various school programs to provide local labour pools with the opportunity for training and opportunities to work on LNG related projects, as well information sessions will be planned to attempt to attract people from outside Northern British Columbia to work on the projects.

Some reviews (with varying levels of the totals of possible employment) of the report can be found below.