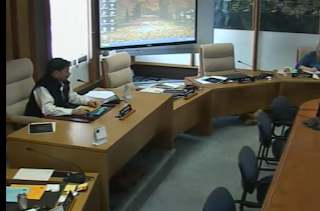 Five minutes of public work and then it was off to an in camera (closed) session of council as the City's elected officials interrupted their summer break, to take care of a variance issue on 11th Avenue East.

The special session of Thursday afternoon was called on Wednesday, by way of a Special notice posted to the city's website.

Attendance was a tad sparse, Councillor Carlick-Pearson not in attendance and Councillor Ashley attending by phone, still Mayor Mussallem and Councillors Thorkelson, Garon and Kinney pushed forward with the one short item of note.

The five minutes of discussion for the most part involved the process of approval of a variance on a property on the east side, a short presentation from the City planner brought the topic to a vote and the approval was granted.

At that point the Mayor brought the public session to a close, though announcing that a closed session set to follow.

In this case, the usual notification (such as this one from July 8th) of an in camera or closed session and some kind of guideline as to what may be discussed, (a procedure which is normally provided) was not posted to the city's website or twitter feed.

Most probable explanation for straying from the normal procedures, perhaps involved the short time frame of the notice for the meeting and the shortage of staffing at City Hall, that in the wake of Corporate Administrator Rob Grodecki's departure last month.

The timeline of the council proceedings can be found in red below, tie in with the City Council video and audio feeds archived below.

Further information such as minutes and permanent placement in the audio and video archives can be found as they are posted to the city website.

(0:00- 1:30) The Mayor opened up the afternoon's proceedings with the adoption of the Agenda and then a discussion of a variance application.

(1:30-4:00) City Planner Tony Krekic outlined the nature of the application and his observations on the proposal, with the recommendation that it be adopted.

(4:00-5:00) Councillor Thorkelson had one inquiry on the nature of sidewalks on 11th and following that discussion the motion was passed.

(5:00-5:30) The Mayor then called for any other items of note for discussion and with none brought forward brought the Special public session to a close, calling for a three minute break before council met in an in camera session.

You can access the City Council Review page for July 25th here, where a number of items regarding the council session, including media coverage of it can be found.

As always, consult with the official minutes from the City, when posted to the website for further review.
Posted by . at 12:00 PM