In wake of Lac-Megantic disaster, there is an increased focus on oil by rail plans 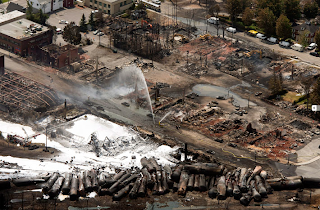 It's every community's nightmare scenario, a major industrial disaster that takes lives and wreaks devastation over a wide swath of the city. 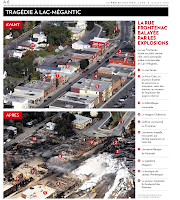 This weekend the nightmare visited the small Quebec community of Lac Megantic, a train from a short haul railway based in Maine, taking oil from North Dakota to a refinery in Saint John, New Brunswick became a runaway and derailed in the heart of the small town.

A tragic string of events that provided for a horrendous fireball and explosion that left at the most recent count, thirteen people dead and numerous others still reported as missing. The force of the explosion destroying a good portion of the town's downtown.

The Canadian Transportation Board has begun it's investigation into the derailment and the timeline of events that led to the incident, though that investigation is still in is opening stages.

There will be many questions to come over the nature of the derailment, the operators of the Montreal, Maine and Atlantic Railway will be required to provide an outline as to how safety measures that should have been in place, would somehow not be enough to prevent the horrific scene played out in Quebec this weekend past.

The railroad provided an update on the nature of their cooperation with the Transportation Safety Board  in a press release issued on July 7th.

The use of rail cars to transport oil to refineries and shipment terminals has been on the increase over the last number of years, particularly as proposed pipeline projects have become engaged in lengthy reviews and consultation sessions.

According to the Railway Association of Canada there could be up to 140,000 carloads of crude oil transported through Canada this year, compared to but 500 car loads in 2009, with the anticipation that those numbers will increase in the years to come.

The scope of the disaster in Quebec however, will now re-engage the debate between pipeline and rail car, the nature of the devastation of Lac-Megantic no doubt providing for extra attention at the many proposals that would see oil transported by rail, especially with that theme no part of the discussion in British Columbia.

In the wake of the Lac-Magnetic disaster there have already been a number of items outlining the challenges ahead for railways in their desire to increase the movement of oil by way of train car.

CBC-- Safety rules lag as oil transport by train rises
CBC-- Lac Megantic disaster stirs train vs pipeline debate
National Post-- Quebec rail tragedy serves as a reminder that oil pipeline debate has let to poor decisions
National Post-- Railway safety regulations likely to be front and centre in wake of Quebec train disaster
Globe and Mail-- Rail cars like those in Lac Megantic disaster are prone to puncturing
Globe and Mail-- Canada needs balanced approach to transporting oil
Globe and Mail-- Oil by rail under scrutiny after Quebec tragedy
Globe and Mail-  Has rail system safety been compromised due to cutbacks?
Vancouver Sun-- Train tragedy: Could it happen here in B. C.?

It is a topic that will have particular interest in British Columbia, both for potential routes to American refineries on the West Coast and for any potential movement to the Northwest and any potential terminals that could be proposed region.

May 2013-- Oil by rail option continues to generate interest in Canada and overseas
March 2013-- The Oil by Rail option, CN builds infrastructure for the future
February 2013-- The next battle over Bitumen?
January 2013-- At the moment, just a red line on a map, but in the future...
November 2012-- Alaska to Alberta rail option could have impact on Prince Rupert

The events of the weekend in Lac-Magnetic certainly offers up some dramatic evidence and many items for consideration.

It marks a terrible tragedy for the people of Quebec and one that puts the oil by rail option under much more intensive amount of scrutiny across North America.

Email ThisBlogThis!Share to TwitterShare to FacebookShare to Pinterest
Labels: Oil by rail options under the microscope