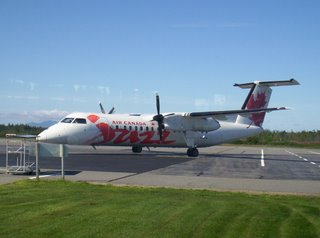 It's a story that started in a firestorm of a rumour that Air Canada Jazz was making plans to leave the Prince Rupert market, a fast moving bit of information, that the Prince Rupert Economic Development Corporation felt was so rampant in the community that it needed to be addressed, sending out a note on their twitter feed last week to advise that  cancellation of air service to the city wasn't the case.

The PREDC tweet outlined that Air Canada Jazz isn't leaving, they will however be changing making what the PREDC called "internal adjustments" as to how they do business here.

And that will apparently mean layoffs and/or restructuring for the local work force, after Air Canada Jazz won an arbitration case that clears the way for the airline to contract out station base positions in a small number of Air Canada Jazz served cities, including Prince Rupert, Sandspit and Smithers in the Northwest.

That contracting out provision, is just part of a larger range of changes for a number of other ground related positions in larger centres. Though many of those positions are along the lines on airline grooming and ramp positions, not in the face to face positions of the station agents.

The arbitrators award, issued on July 17th will serve to be included as part of a new collective agreement between the CAW2002 and Aircraft Services and Jazz Aviation LP.

A contract negotiation that was conducted over twenty days of face to face bargaining, which had been preceded by two days of mediation.

The arbitrator's decision provided much in the way of background to the dispute and addressed the issue of some of the financial challenges of the employer, in the face of growing competition in the airline industry.
.
At the same time the financial challenges of the employer are not to fall on deaf ears. The challenges laid out for Jazz by Air Canada are real and proven. The entry of Sky Regional as a serious threat to Jazz in competing for a portion of the regional landscape is real. The aviation landscape throughout North America is littered with airlines that have failed to recognize and adapt to the changing environment. --  A key line from Arbitrator Tom Hodges on the Air Canada Jazz/ CAW 20002 arbitration decision
.
It would appear, that with the arbitration award, that Prince Rupert and a few other cities served by Air Canada Jazz will be the first to feel the impact of that changing environment.

The portion of the Arbitrators decision with the most impact on the Northwest, can be found on pages 13 and 14, passages which outline the scope of the contracting out provisions of Mr. Hodge's findings.

The union representing the airline workers CAW2002 issued this news release on the arbitration case and the impact it will have on the affected employees and communities.

No timeline was indicated as to when the contracting out will take place, nor if any of the locally based employees are being offered positions with the other Air Canada Jazz bases that are not going to be reconfigured.

What's interesting for the Northwest is that the Terrace Air Canada Jazz station will apparently not be affected by the change to a contracting out basis, as those at the other Northwest locations, perhaps a nod that with West Jet arriving in the fall, any indication of service adjustments may not be helpful in customer retention in a full on airline battle.

For Prince Rupert, the shake up in the local airline business model will see long serving employees perhaps having to leave their jobs, or if possible seek transfer elsewhere (we imagine they could apply for the new ones, though at a lower rate of pay as per the newly designed B pay scale option for new hires that the new positions in Prince Rupert would we imagine fall under).

Familiar and helpful faces for Prince Rupert travellers, who have provided service to the airport and the community, knowledgeable as they are to the unique nature of the YPR airport set up and the challenges it provides for transportation on the North Coast.

While the arbitrator makes a good case for the changing nature of the aviation industry, the fact that Air Canada Jazz is picking and choosing select cities, while maintaining current service arrangements in others does leave one wondering as to the nature of two tier aviation in the northwest (both for the employees and the customers).

Considering the City of Prince Rupert's interest in labour issues over the last few years, (Ridley Terminals privatization, fishery disputes,  etc), not to mention the wish to see YPR continue to remain relevant to travel in and out of the City, they may wish to inquire of, or better yet, have Air Canada Jazz representatives (who have yet to make any statement on the pending changes) come on up and explain the whole contracting out concept.

One can understand an industry wide changeover where all communities are treated equal in tough economic times, however the darts on the map visual that his change seems to implement is one that  raises a number of thoughts.

In particular, one question that strikes us as interesting is, why the Prince Rupert Airport and its customers, do not apparently require the same level of service and experience as do the residents of Terrace?

As we mentioned, Prince Rupert is not alone when it comes to the contracting out situation at the local airport, below is a report from Medicine Hat, Alberta outlining the situation in that community with world of the changing nature of the airline industry.