Questions over the cost of a neighbourly visit 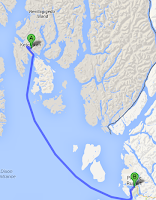 The annual trip of Prince Rupert representatives to Ketchikan for 4th of July festivities has come and gone, with as we outlined on the blog last week, a large delegation of Rupertites making the trek north to take in the American celebrations.

The city contingent is reported to have featured the Mayor, Councillor's Kinney and Garon, as well as the City Manager, Robert Long.

In addition to the city's municipal officials, the RCMP, Marine Search and Rescue, Port of Prince Rupert, Ridley Terminals and Port Edward also sent participants to the festivities.

The exchange of representatives is a long tradition for the region, with Alaskan visitors traditionally arriving for Canada Day, while we send a delegation North for the 4th of July.

However, this year, with Prince Rupert's well documented financial travails still fresh in our minds, the large delegation that went north has raised the eyes of a few observers in the community.

High among them, Todd Hamilton, the editor of The Northern View, who revealed in an editorial that the preliminary cost of the City's trip north has been estimated to be at around 5,800 dollars.

A cost that the editor suggests, is one that perhaps the City might have given some thought to paring down in struggling financial times.

You can read over his editorial from the Northern View's e edition for July 17th on page A4.

While few would suggest that the exchanges don't provide for goodwill, the prospect of the optics of it all, especially in these tight financial times, might have trumped such a large delegation this time around.

With the city raising taxes and seeking community assistance in other aspects of community funding, the travel expenses for many will seem to be an extravagance that could have been deferred to better financial times.

If nothing else, the scale of the civic delegation this year, suggests a rather tone deaf nature to the City's proclamations of needed belt tightening, a process that is apparently only limited to other belts.
Posted by . at 8:39 AM

Email ThisBlogThis!Share to TwitterShare to FacebookShare to Pinterest
Labels: Questions over civic trip to Ketchikan for 4th of July