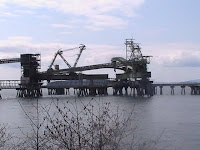 A raging debate is ongoing in Vancouver, as the City council there seeks to seemingly bring an end to coal shipments through their borders, to Terminals in the region.

An interesting bit of political theatre that has more than a few observers wondering what it may all provide for when the dust, or  "coal dust" if you will, settles.

As part of the debate there appears to be a suggestion from some in Vancouver, that Prince Rupert should be the new destination point for coal products in British Columbia.

That was a theme that was alluded to by one Vancouver council member, Dr. Kerry Jang,  who suggested in an interview that coal could be shipped through other ports, in more isolated areas such as Prince Rupert.

Or as the old saying goes, out of sight, out of mind.

Vancouver council recently passed a motion that would ban coal from being stored within city boundaries or from transiting through the city of Vancouver to port facilities. With Vancouver Council suggesting that they are sending a symbolic message to the coal exporters and terminals, the key word being symbolic.

As the Port of Metro Vancouver points out, no actual coal travels through the Vancouver City limits, so it's a bit baffling why Vision Vancouver, the local party that is behind the symbolic ban has decided to take on a fight that it basically has no jurisdiction over.

That was a point made on the  Bill Good Show last week, as the talk show host addressed the topic of Vancouver City Council's interest in the coal discussion.

You can listen to that aspect of the conversation from the July 10th archive item from CKNW Audio Vault, the topic of Vancouver Coal Shipments is at the 8:35 AM minute mark, discussion on the topic runs for ten minutes or so.

The coal discussion, seems to have provided the Vancouver City Council the opportunity to weigh in on things that may be beyond their actual job description. Offering up some talking points on a topical issue, a novel concept, however in the end, one which they have absolutely no control over.

It's a thought that could find some resonance in Prince Rupert, where City Council recently has expressed its concerns over the growing nature of environmental assessments for projects in the region, some of which are beyond the city's borders and for some residents, items that may be considered beyond the reach of the city's responsibility.

As for the Vancouver debate, Port facilities are federal and the nature of the transportation requirements currently in discussion, are ones that are historic in nature for the Greater Vancouver area.

All of which we imagine will make for a industry that won't be easily changed.

Still for the proponents of shifting the shipment of coal to Prince Rupert (like Vancouver's Councillor Jang) the foundation for growth is already in place.

Prince Rupert's Ridley Terminals (currently in the midst of a potential privatization bid) is already expanding its footprint on Ridley Island, increasing their throughput and with the expansion, will be ready for future growth.

Still to be developed is a project to transform Watson Island into a shipment terminal as well. Two of the main investors in that development are coal companies, should they ever get the much discussed development underway, there are also plans to ship coal through a bulk goods facility to be created there.

A good portion of the shipments out of Prince Rupert at the moment come from the Northeast BC coal fields, though for a coal mine operator in other locations of western North America, the prospect of coal handling facilities with room for growth could be a major factor in redirecting their trains to where the turn around time is best.

Especially, if the door keeps getting shut to the south...