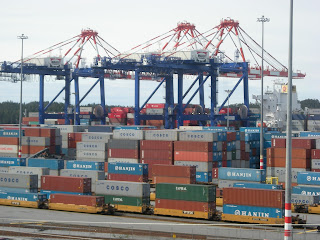 With container traffic providing for the bulk of the industrial traffic that is currently rolling through the city's streets, Prince Rupert council is seeking for some solutions to the lengthy convoys of trailers that travel from the Port to Ridley and Watson Island locations.

Council took a first look at the issue on Monday evening, outlining the concerns of many that the trucks are travelling at speeds that may not provide for enough stopping time should inattentive residents cross in front of their paths. 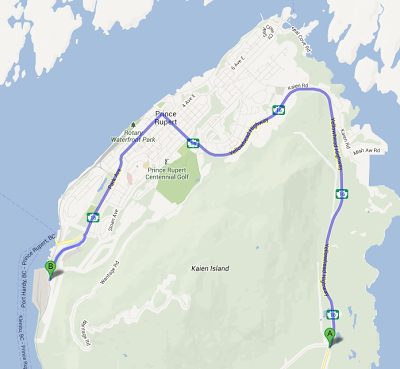 The issue will remain a concern until a truck bypass is completed between the port and the industrial sites on Ridley and Watson Island.

As we outlined on the blog in October of last year, that proposed route is on the drawing board, but as of yet construction has not commenced to reduce the impact of the increase in container traffic from the port and through the city's streets.

Another concern related to the increase in that truck traffic is the quick deterioration of the city's surface streets, as the heavier and frequent loads of the containers begin to take their toll on the city's road infrastructure.

You can follow along with the discussion from Monday's council meeting from the City's video archives.  The container issues can be found from the 30 minute to 38 minute mark
Posted by . at 9:34 AM

Email ThisBlogThis!Share to TwitterShare to FacebookShare to Pinterest
Labels: Increased levels of container traffic through the city on the mind of council July 2013