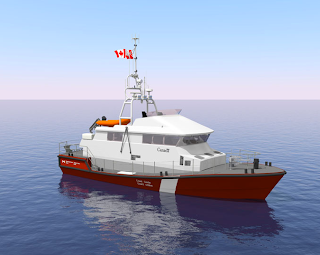 They won't be taking to the water for a few years yet, but this past week the Canadian Coast Guard revealed some more details on the plans to replace some of their aging vessels with new, Canadian designed vessels to provide Search and Rescue and enforcement requirements to a 100 mile limit off shore.

The vessel replacement program, which could number as many as ten new vessels, will begin in 2014.

The tender for Canadian shipyards is expected to be announced shortly, with the work to be
distributed to shipyards that did not receive the larger vessel replacement contract that was recently awarded by the Federal Government.

The design of the new vessels was developed by Vancouver based, Robert Allan Ltd.

The design for the new vessels, is along the lines of vessels used by the Royal National Lifeboat Institution  in the United Kingdom, though the Canadian version will be larger and have greater range.

The funding aspect of the new vessel program was revealed on June 26th.

Further Details on the new Coast Guard Lifeboat program can be found here.

BC Shipping-- Robert Allan Ltd. design a new generation of high endurance, self righting lifeboats for Canadian Coast Guard
Posted by . at 9:15 AM