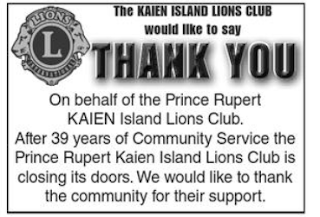 One of Prince Rupert's two Lions Club chapters has announced plans to shut down operations, a short advertisement in the Wednesday edition of the Northern View outlining the cessation of operations of the Prince Rupert Kaien Island Lions Club.

The Club which met every second and fourth Tuesday at La Gondola Restaurant, is just the latest of the long time community clubs to suffer from the population decline and changing commitments from local residents in the last decade.

The Lions in particular have been a popular service club, which during the days when Prince Rupert's population was larger, found many community residents eager to take part in activities

The contributions to the community that clubs like the Lions, Rotary, Elks, Shriner's and Legion to name a few make are numerous.

Though as we learned last week, sometimes the recognition from elected officials probably leaves them wondering if their efforts are fully appreciated.

There are still a few of the once familiar service clubs around to provide service to the community and while the Kaien Island Lions may be closing down operations, the Lions organization will still be represented in Prince Rupert.

The Prince Rupert Lions Club still remains active, with meetings on the first and 3rd Thursday of each month. Their latest information can be found from their website or on their Facebook site.

The Lions also operate a chapter in Port Edward, though population decline has affected their turnout in recent years.

While the economy begins the process of rebounding on the north coast, it will be with interest to see how many of the local service groups can find new and in some cases, younger members, to carry on with the tradition of providing service to the community, one which the Kaien Island Lions Club provided to Prince Rupert for 39 years.
Posted by . at 8:19 AM