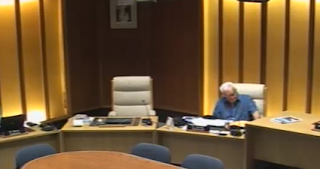 When it comes to providing for a full house at City hall, it appears that there won't be any rush to secure a replacement for the departed Councillor Jennifer Rice.

Prince Rupert City Council would seem content to let the summer slide by, before they tackle the challenge of a by-election and finding someone to take up the sixth chair among Councillors at City Hall.

The prospect of replacing the now MLA for the North Coast on City Council was the subject of a short review at last week's City Council Meeting.

City Manager Robert Long provided some guidance for Council on the issue,  advising that the Council will need to appoint a Chief Elections Officer, who will then decide the path forward in August would set in motion the process of the by-election process.

He recommended that Council give the by-election further consideration at their August 19th meeting.

As outlined to Council, if the August meeting provides guidance to staff, the projected timeline for a by-election would be to hold it in the fall, with October the most likely month for Rupertites to head for the polling booth.

The fall vote was a suggestion that Councillor Ashley was in agreement with, the idea of taking their time in seeking a replacement for Ms. Rice seemingly the consensus of council, suggesting that the idea of a summer election made no sense at all and that Council should arrange for the election when residents are around.

Councillor Carlick-Pearson took time at Monday's council session to inquire as to the cost of the by-election process.

The City Manager advised that there could be two paths to follow for financing a by-election process, though he wasn't at this time inclined to outline those costs and any cost savings measures, that the City could employ along the way.

He also advised Council that there is some thought and a bit of discussion within the Civic Administration, that there could be a way of doing the by-election differently.

However, on Monday evening, Mr. Long didn't expand too much on that theme of what could be done differently regarding the by-election process.

He did advise, that the cost of the by-election could be dependent on which path Council should take once they review the Report to come in August.

Council passed a motion advising that staff should bring a report on the by-election process forward for consideration at the August 19th session of Council.

Councillor Rice resigned her position on Council on June 10th, if a vote is delayed until October of this year, it would mean that her seat could be vacant for at least four months.

You can review the full discussion on the By-election process from the City's archive of the Monday council meeting, the three minute discussion outlining the first steps on the way to replacing Councillor Rice can be found from the 1 hour 18 minute mark to 1 hour twenty one minutes.
Posted by . at 9:30 AM

Email ThisBlogThis!Share to TwitterShare to FacebookShare to Pinterest
Labels: By election to be delayed until October 2013