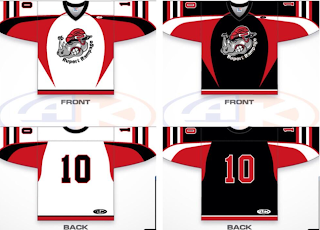 When the Prince Rupert Rampage take to the ice in September, they'll be featuring a new look and it won't be just some new names on a few sweaters.

Actually, it's the sweaters themselves that will make news as training camp opens for the Rampage, as the Central Interior Hockey League team will feature a new look on their hockey jersey's for 2013-14.

The Rampage announced their new look on twitter this week.

With training camp but a little over a month away, the Rampage will be looking to improve on a 2012-13 season that provided for a number of challenges, the most obvious one being their lack of ice time owing to the troubles with the Civic Centre's ice making machinery of last year.

That resulted in the team embarking on a draining extensive road trip to start the CIHL season, a schedule that clearly had an impact on their place in the CIHL standings last year.

With a full pre season of available ice at home, 2013-14 could provide for a more rewarding result for the local squad.

And while the Rampage will sport a new look on the ice, the CIHL will also be making a few modifications to the 2013-14 season.

The Omineca ice have advised the CIHL that they intend to fold their operations, the lack of available players in the region the main reason behind their decision.

However, the return of the Hazelton Wolverines will fill that open spot on the CIHL schedule for the upcoming season, which will feature an 18 game schedule with three divisions.

The Rampage once again will compete in the CIHL west, with rival Terrace River Kings and and Kitimat Ice Demons the main obstacles towards a Coy Cup berth in 2013-14.

A new feature for the fans with the season to come will be the introduction of a five minute 4 on 4 overtime period before proceeding to a shoot out, with the hope that the 4-4 provides just a bit more excitement for CIHL games that end in a regulation time tie.