The Northern View this week was busy trying to chase down a rumour on the Cosco container ship line and its plans for the Port of Prince Rupert.

Seeking more information on the suggestion from some in the longshore industry, that Cosco Lines, with declining numbers this year, was perhaps planning to end its service to the Port of Prince Rupert.

A suggestion that the shipping line described as wrong, offering up the thought that whoever was providing the Northern View with their information, "has no idea what the hell they're talking about".

(You will have to seek out the Northern View's July 24th print edition, page A6, as no online version is currently available)

While Cosco was addressing the Prince Rupert speculation, the theme of challenging times in the container industry was getting a more full review in the international press. As another major shipping company was offering up notice, that the current struggles in the container shipping industry will continue on for the next few years.

Soren Skou, the CEO of the Maersk Line, one of the worlds largest container lines, provided an update to the Financial Times of England, outlining how Maersk believes that the container industry is in for a "new era" that will see growth in demand fall to half of the levels seen over the past twenty years.

The full review can be found here,  the main point from Maersk being that the industry will have to adapt to annual growth of only 4 to 5 percent in the years to come.

Those predicted levels indicate a slowdown is going to carry over, a situation that will be significantly different compared to the halcyon days of trade earlier this decade, when levels were booming at 10 percent growth.

Those surging numbers of the early 2000's changed with the arrival of the economic crisis of 2008 and recovery, if the Maersk observations are correct will not only be slow, but challenging for container lines worldwide.

Maersk officials are currently seeking to gain better returns from their container ships, by building a new line called Triple E (which we reviewed on the blog earlier this year), giant container vessels that Maersk believe will cut their costs by at least 30 percent. 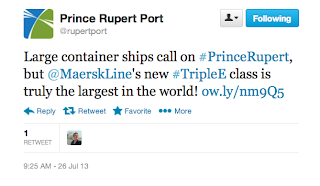 At the moment, Maersk does not make a port call in Prince Rupert, currently calling on Montreal, Halifax and Vancouver.

Update: The Northern View item referenced above was added to their online archives, through their e edition for July 24  pg A6
Posted by . at 7:54 AM