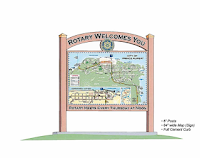 The nature of the commentary from City Council regarding the newly installed Welcoming sign on Park Avenue, has left some Rotarian's feeling a little unappreciated and more to the point, offering up the thought that the City needs to recognize those in the community that offer up time and money for community projects.

The Rotarian's concerns can be found in a letter to the editor of the Northern View of Wednesday, July 17 (page A 5 of e edition), where Nancy Eidsvik outlines some of the concerns of the community service organization which recently contributed $10,000 dollars for the sign at the new Ministry of Transportation pull out on Park Avenue. 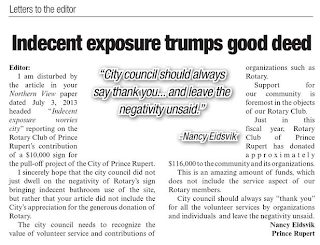 At issue it seems are the comments from Council reported in the Northern View of July 3rd (e edition pg 7), stemming from the Council session of June 24th.

A session where, rather than focusing on the generous nature of the Rotarian's, Council weighed in on other aspects of the location chosen by the Ministry of Transportation, including the prospect of travellers relieving themselves at the pull out, when nature calls.

While Councillor Ashley took time in the discussion to thank the Rotarian's for their contribution, Councillors Thorkelson and Garon focused on the potential problems with the site.

It was a commentary that hit a sour note for the Service organization that provided for the necessary funding for the sign in the first place.

You can review the Council discussion on the highway pull out from the City Video Archives for June 24th, the conversation starts at the (1 hour 20 minute mark and runs to the 1 hour 26 minute mark)

As we outlined on the blog in June, the Rotary Club of Prince Rupert took up the call of Council to provide for a sign at the pull out that would provide  a map of the city for travellers, providing the funding for the sign.

City Council has at past sessions issued many a request for local industry and/or service groups to lend a hand on some of these types of items of concern, seeking funding for the pool, civic centre and such as a way of lessening the load on civic coffers.

The Rotary efforts were a welcome contribution to the project and one that does seem to have answered the call of the City, to lend a hand on items of community interest.

So perhaps as the Rotarian's suggest, just saying thanks might have been the best approach.

Considering the nature of the City's request that industry and service groups step up, the City's sense of appreciation it would seem is rather lacking for those that do.