While the grey skies and cooler weather of the last few days has reduced the dangers of wildfires in the North Coast Forest District, the further east you travel this weekend, the more likely you are to see the danger arrow moving towards a higher risk factor.

The Ministry of Forests, Land and Natural Resources outlined the ratings for the province heading into the weekend, with areas of the Central Interior showing a potential for trouble for the woodland areas, east of Vanderhoof and Prince George. 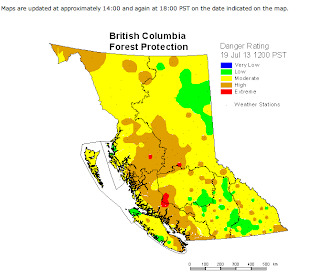 At the moment the only area of major concern in the province is in the Pemberton region, where the Lizzie Creek fire has required that  some evacuation alerts to be issued.

For the Northwest no advisories are in effect, though to the north, there are reports of wildfire smoke visible in the Cassiar Fire Zone, smoke that has been carried into Northern British Columbia from wildfires currently burning in the Yukon and Alaska.

The Northwest Fire Zone is urging vigilance of the public during the extended hot spell further east and reminds travellers and back country users of their reporting lines.

Email ThisBlogThis!Share to TwitterShare to FacebookShare to Pinterest
Labels: higher elsewhere across Northern BC, Wildfire risk low for North Coast