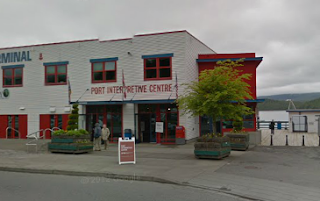 Open but a little over a year and already the Port of Prince Rupert's Port Interpretive Centre appears to have become a must see destination for locals and visitors alike.

The Centre celebrated it's 10,000th visitor on Wednesday, as a local family the Amante's showed off the  sights of the hometown to their uncle from Rossland, BC.

The Port's President and CEO, Don Krusel celebrated the 10,000th visitor to the Centre with souvenirs for the Amante's, to commemorate their visit and herald the success of the Interpretive centre.

Opened in June of 2012, the local attraction outlines the nature of Port Development and offers up a vision of what it all may look like should visitors come back in a few years time seeking a progress report.

The Interpretive Centre features exhibits on the history of First Nations culture and trade in the region, the vision of Charles Hays for a northwest port and development of a city, the passage of time through World War II and its importance of the port and on to the current development of the Northwest's Pacific Gateway.

Located in the lower level of the Atlin Terminal, the Centre provides a hands on and interactive look at the Port. Offering a chance for some self exploration, or the opportunity to learn more through guided tours.

Featuring free admission, the Interpretive Centre is open seven days a week between 9 AM and 6:30 PM until August 31st,  the schedule of hours for the remainder of the year is available at the Centre's website.

Word of the attraction spreads quickly and while now well known in the community, it's also gaining some note among tourist destination sites.  The TripAdvisor.ca listing of Attractions in Prince Rupert currently ranks the Port Interpretive Centre at number 6 on the Must do list for visitors to Prince Rupert.

You can learn more about Wednesday's celebration here and you discover more about the Port Interpretive Centre here.
Posted by . at 8:53 AM