Travel along Highway 16 was being re-routed through the Vanderhoof region Saturday afternoon, that after a vehicle incident on the highway resulted in the road being closed as part of a police investigation.

The incident which took place just east of the Central Interior community, resulted in the road being closed in both directions, with traffic being directed to Mapes Road, Stump Road and then along Sob Lake Road.

A report from the Prince George based website Opinion 250 states that there is an unconfirmed report that a flag person working on the highway had been struck by a vehicle.

Construction crews were working in the region this weekend with the road reduced to single lane traffic, alternating traffic in the construction zone.

At the moment the RCMP is conducting an investigation into the incident, with the anticipated reopening of the highway to take place sometime between 6 and 10 PM.

The next update from Drive BC is expected to take place at 6 PM.

Update 1: Opinion 250 provided further details on the incident, which confirmed that a Prince George based flagmen was struck by a vehicle shortly after 1 PM today.


Drive BC updated their information as well, with an advisory that the highway was estimated to reopen sometime between 8 and 10 PM. 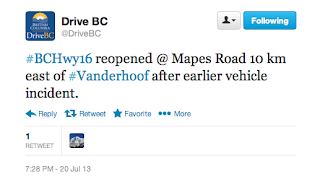