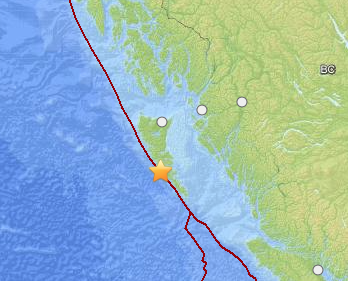 The earth shifted a bit under Haida Gwaii on Saturday afternoon, as the twin islands were rattled by a 4.7 magnitude temblor centred 143 kilometres south of Masset, with the epicentre located just off the western shore of the Islands.

The first reports of the rumble on the Islands started to come in shortly after 2 PM, with the USGS reporting that the time of the incident was 2:05 PM.

The seismic event featured a depth of 11.8 metres.

The Tsunami Warning Centre for Alaska, British Columbia and Washington State issued a notice advising that NO Tsunami would be generated from Saturday's quake on Haida Gwaii.

It follows by two days, the large 6.2 quake that struck south-central Alaska near Anchorage.

You can review our archive page of past seismic events here.

Update: Note quake intensity was reduced by USGS on Saturday afternoon to a 4.6 magnitude
Posted by . at 2:28 PM