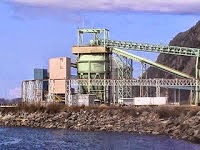 An interesting aside from an item in the Vancouver Sun from August sheds a bit of light on the ongoing efforts to privatize one of the North Coasts major employers.

The Federal Government's privatization plans for Ridley Terminals Ltd. is apparently still a work in progress, however owing to a slump in the coal industry and the pace of continuing talks with a number of regional stakeholders, there seemingly hasn't been much progress to be made at the moment.

According to the short passage pertaining to Ridley Terminals in this article in the Sun, efforts continue with the Government "consulting with key stakeholders, including First Nations, in respect to the proposed divestiture of Ridley Terminals, in advance of initiating a formal sale process".

The Ridley Terminals privatization issue made for much discussion in the area when it first was proposed by the then Liberal government.

That proposal was stopped by the Conservatives when they took power in 2005, only to see the Harper Government reverse its position in 2012, when they put the North Coast coal terminal back onto the For Sale listings.

As they did at the time of the Federal Liberal's plan, City Council once again raised some issues of concern that they had with the Harper Government's plan to privatize the coal terminal on Ridley Island.

Since that time, the privatization proposal has been apparently been an active file, though not in as fast paced a process as perhaps many thought two years ago, with no hint as of yet that any deal is coming to a close.

You can review more items of interest on Ridley Terminals from our archive page.
Posted by . at 8:29 AM