For those communities across Northern British Columbia counting LNG dollar signs in their sleep, there was a bit of a reality check delivered on Monday by the Provincial government.

During the opening day of the UBCM sessions in Whistler, Rich Coleman, Minister of Natural Gas Development, and the point man tasked with steering home the ambitious LNG plans of the Premier to a conclusion, offered up the thought that municipalities may wish to reduce their expectations (and their taxation plans) accordingly.

In recent months, as this Frances Bula item from the Globe and Mail highlights,  Northern Communities have grown frustrated over the growing silence from the government on such issues as local infrastructure, housing and the prospect of an increased demand on services with increased development.

The Minister cautioned delegates to the Monday UBCM session that they need to make sure that they don't raise industrial taxes so high that they scare off project proponents.

In an interview with the Vancouver Sun, Mr. Coleman outlined the Liberal government's plan to introduce a fiscal framework which may not only address the LNG industry tax issue, but also develop a plan for municipal property taxation.

BNN--  B. C. to release LNG tax laws next month

As part of his commentary for the Sun, Coleman provides a glimpse into that municipal plan, explaining how it could be based on the province's existing port taxation policy in Prince Rupert.

A plan which Coleman described a "fair but limited". 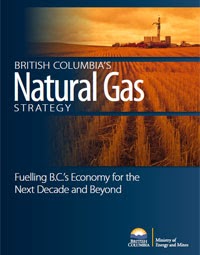 If that is the blue print that the province has in mind for municipal compensation from LNG, it may prove to be a  disappointing proposal for Prince Rupert City Council, particularly the suggestion by the Minister of as to it being fair, but limited.

That would seem to be an observation and conversation point that Prince Rupert Council members won't share, at least judging by their discussion points on taxation themes at past Council sessions. (see here and here)

In fact, as we noted on the blog yesterday, high on the list of resolutions that the Rupert delegation has taken south with them, are items pertaining to port taxation and grants in lieu of taxes.

One gets the feeling that the City and the Provincial government may be on opposite ends of the fiscal page when it comes to the interpretations of those resolution items.

Two articles from yesterday's UBCM files, offer up a fair bit of background on Mr. Coleman's talking points from Monday, including the possibility of a cap on taxation if the Province believes it is required.

There is also some reaction in the media review from Mayor Jack Mussallem,  who outlines the City's point of view on the theme of revenue generation from LNG development.

The solution that the Province appears to be working on, would appear to not quite be what Prince Rupert has in mind, particularly when it comes to delivering a financial reward for hosting those LNG terminal development plans.

There is more on this week's UBCM gathering available on our archive page.

More on the number of proposed LNG projects for the North Coast can be found here.
Posted by . at 8:22 AM