North Coast MLA Jennifer Rice made the introductions for colleague Bruce Ralston,  who oversees the LNG file for the Opposition NDP, as the pair reviewed the state of the LNG development file on the North Coast.

Ms. Rice and Mr. Ralston, the MLA for Surrey-Whalley met with local government officials and made plans to discuss the issue of LNG development on the North Coast at the UBCM convention to take place later this month.

Touching on a number of themes that local officials have been concerned about in recent months, the pair of NDP politicians  highlighted the interest in financial support for both physical infrastructure requirements and social support for the anticipated population growth that is anticipated as the pace of development increases.

"We want safe LNG development that benefits our province and people. The New Democrats believe getting the right balance is crucial to our province's future ... LNG development needs to create jobs and benefits for British Columbians; however, protection of our wilderness, marine resources and environment is paramount"-- MLA Bruce Ralston on LNG development in the Northwest

MLA Rice for her part offered up her thoughts on LNG development and the impact of it in the region, looking for an equal division of benefits for all in the region.

"There needs to be a fair share of the benefits for everyone, including First Nations, local communities, businesses and workers" 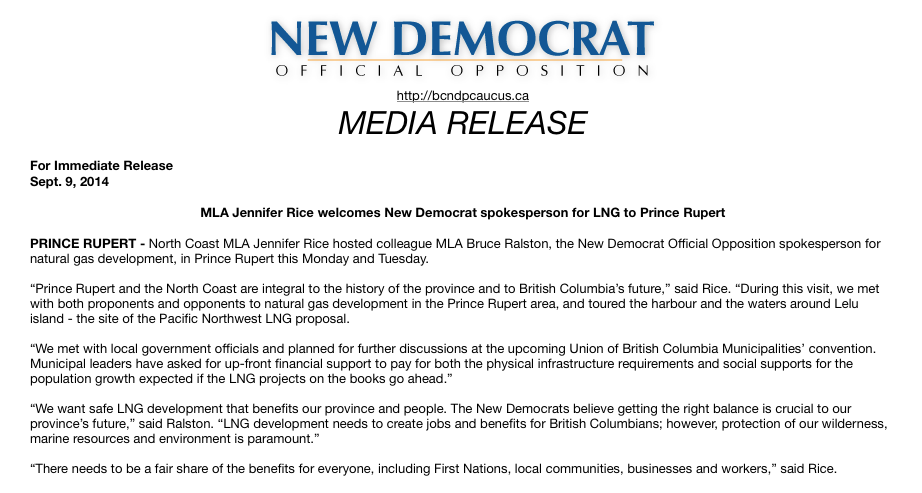 The pair met with both proponents and opponents to Natural Gas Development in the Prince Rupert area. Included on their original agenda for the two days was to be a tour of the waters around Lelu Island, which is the site of the PacificNorthwest LNG proposal.

However according to this item from CFTK TV, yesterday's foggy conditions around Prince Rupert resulted in Mr. Ralston not being able to participate in the tour of the Lelu Island site.

The NDP provided some background to their tour of the Prince Rupert region through a press release from Tuesday.

You can review more on LNG development on the North Coast from our archive page.

For more items on developments in provincial politics see our Legislature Archive page.
Posted by . at 8:39 AM