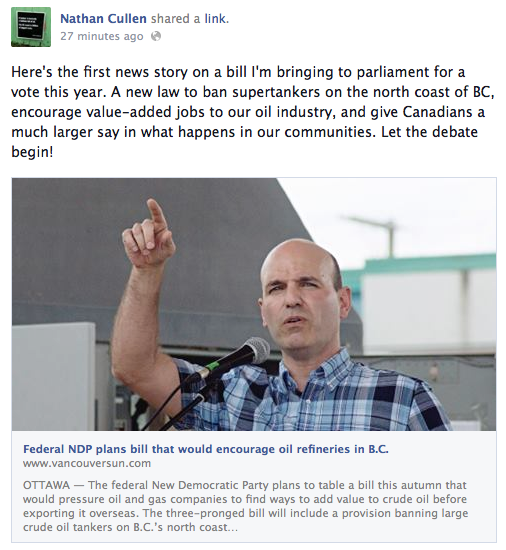 When he returns to Ottawa for the fall session of Parliament, NDP MP Nathan Cullen will be looking to take point on a pair of issues of interest to all across Northern British Columbia.

Through his Facebook page, The MP for Skeena-Bulkley Valley offered up a note of his fall plan of action, with a proposal to introduce a bill in Parliament that would see oil tankers carrying crude or bitumen banned on the North Coast, while at the same time seeking an increase in the number of value added jobs in the energy sector for the region.

Mr. Cullen's full proposal was fleshed out for the Vancouver Sun in this article (see here).

From it the key points of interest include. 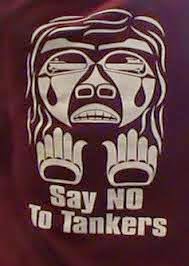 Touting a pair of oil refineries proposals as value-added initiatives, which would not be subject by a ban that would target crude oil supertankers.  Both proposed developments would have to meet the need to obtain public buy-in, as well as support from First Nations.

Through his proposed bill, Mr. Cullen once again re-introduces his thoughts on the Social License aspect of his previous conversations on resource development in the region, a project that he first outlined for the region back in November of 2013.

That concept returns for further consideration as part of his planned fall initiative in Ottawa.

Calling his bill a "Jobs bill" his proposal would provide greater certainty by making it clear that companies can't impose projects without a social license given by supportive members of the public, First Nations and provincial governments.

The NDP MP called attention to the recent NEB panel findings on the Northern Gateway project, Mr. Cullen outlined for the Sun that if his bill was to pass, it would be more difficult to get permission from the regulator if you have not demonstrated you have social license.

So far the reaction to his proposal appears a tad mixed, with more than a few comments placed on his Facebook page announcement, suggesting that his proposed bill might not reflect the wishes of all that live in Skeena-Bulkley Valley

Making for one point of discussion that may come up during the next federal election campaign, which Mr. Cullen intends to run in.

While he apparently did not share his anti tanker bill proposal with CFTK Television, Mr. Cullen did outline for the regional TV station his plans to stand once again for election when the next Federal Vote comes along, anticipated for sometime  in 2015.

You can review that aspect of the MP's long range planning here.

For more items on developments out of Ottawa featuring the region's MP see our archive feature here.