He's only been in place for a few weeks now, but Alberta Premier Jim Prentice would seem to have a rather full "to do" list ahead of him and one item of interest to Northwest British Columbia will be his thoughts on how to move the Enbridge pipeline project ahead.

Mr. Prentice offered up a few thoughts to reporters this week, suggesting that there are "other options" to Kitimat as a destination point for the Enbridge project.

In articles with national and Alberta based media, the Alberta Premier observed that it was in Alberta's best interest that "multiple" options were explored in order to deliver Alberta's oil to new markets.

A few destinations on Mr. Prentice's map might sound familiar to residents of the North Coast, with Prince Rupert one of particular interest to the Premier, a location which he called a "significant asset".

Alberta also has thoughts on at least three other potential shipment points in the province, including the possibility of shipment through a port facility at Lax Kw'alaams.

Mr. Prentice is rather familiar with the opportunities that could be provided through the Port of Prince Rupert from his time as a member of Prime Minister Stephen Harper's cabinet and he also knows first hand the controversial issues of the Enbridge proposal, having been a consultant for Enbridge, speaking with aboriginal groups during the  Northern Gateway hearings process. 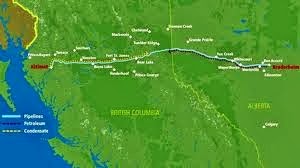 In his media blitz, Prentice touches on the nature of the current troubles that the Enbridge proposal is
having when it comes to acceptance, particularly the concerns of coastal First Nations, which the Alberta Premier says he hopes to address through relationships he has built over the years with communities along the coast.

He also offers up a few thoughts to the growing concept of refining Alberta oil at home for shipment, a proposal that seems to have provided for less in the way of outright hostility than the raw bitumen project that the Northern Gateway proposal offers.

Any move to redraw pipeline maps and destinations would have to be returned to the National Energy Board for further consideration and no doubt another round of hearings on the controversial topic.

A read through of the articles below, provides a fairly good thumbnail sketch as to where the new Alberta Premier may take the dialogue on re-engaging British Columbians in the debate over moving Alberta's oil to world markets.

Whether he'll be around long enough to see any progress on the energy plans remains to be seen, Prentice has taken over a Progressive Conservative party in Alberta that is in quite a bit of disarray, having suffered badly in the popularity polls during the Alison Redford term.

At some point he will have to take his party into an election, where at the moment success is far from guaranteed.

Where Alberta's energy delivery program may go from that point is anyone's guess.

Background items on the Prince Rupert Port Authority can be found here, while our archive of items related to Oil terminal development can be reviewed here.
Posted by . at 9:24 AM