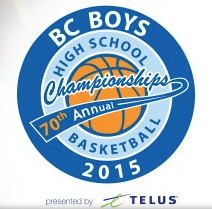 The pre tournament hype for the British Columbia High School Championships was launched on Sunday afternoon with a one hour special stream cast of the Opening round draws for all four levels of the Boy's tournament for March 11-14.

The Opening round schedule was previewed Sunday by Chris Kennedy and the Vancouver Province's Howard Tsumura, who offered up some intriguing notes about what may lay ahead for the Rainmakers as they make their Langley return.

For the Charles Hays Rainmakers, the opening tip off comes up on March 11th at 1:45 as the Northwest Zone champs take on Mark Isfeld from Courtenay.

The Ice advanced following the Vancouver Island championships over the weekend, one of three Island teams to make the trip across to Langley.

The Rainmakers will head into the AAA Tournament rated as the number four seed, among the sixteen teams that have qualified for the 2015 Championships. 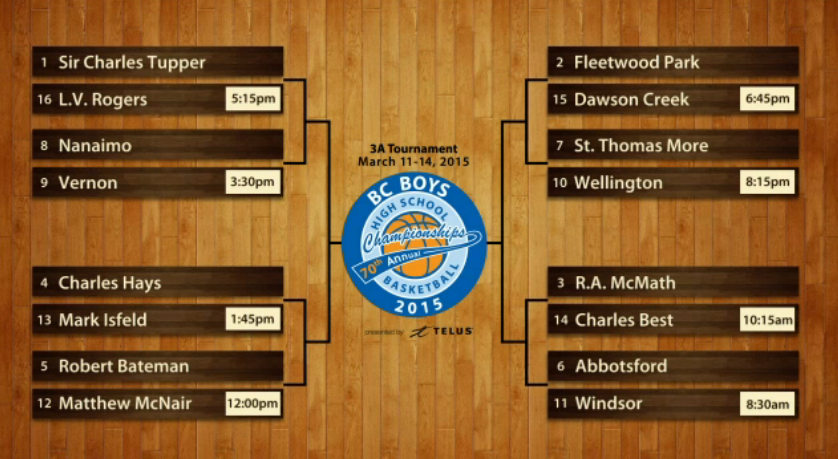 Charles Hays won't be quite the unknown this year that they were one year ago, Tsumura has made sure of that, with frequent mentions of the Rainmaker squad and a feature article two weeks ago.

That review highlighted the path of Mel Bishop's Charles Hays team this year and in particular put some focus on the season that Justin McChesney has had in Rainmaker green and blue this year.

Not surprisingly, based on their play of the 2014 tournament, the pair suggested that the Rainmakers will be a presence in the tournament. With the provincial stage making for another opportunity for McChesney to continue to showcase his skills on the large stage in Langley.

As part of their pre-tournament observations, they marked the Rainmakers as a team to watch in this years draw. Creating even at this early stage, for a bit of the buzz for the Provincials.

The pair made note as to how hard the Rainmakers have fought to get back to the provincials, and will be a team that could find a lot of support from the LEC crowd should they begin to make another run at title this March.

Heading into the Provincials, the team to beat is Charles Tupper, ranked number one at the AAA level, a squad that the Rainmakers are familiar with from their travels to the south in 2014-15.

Most recently taking the Tupper squad on in January, with the Rainmakers coming within three points  in a thrilling 55 to 52 match up at the Pitt Meadows Air Show.

And for those looking for omens of potential success, the odds would seem good that a team with the name Charles will find success at this years Provincial.

Besides the Charles Hays Rainmakers, and Sir Charles Tupper squad, Charles Best has also qualified for Tournament action. As they head towards the March 14th championship game, the Rainmakers will be looking to make sure that at least one of the teams representing a Charles makes it into the banner battle.

You can review the full AAA overview from Tsumura and Kennedy starting at the 34 minute mark on the video below.

The remainder of the program offers up a breakdown of all the tournaments in play in Langley this month.


As we get closer to Tournament time we'll expand on our AAA Provincials coverage, until then you can keep up on all the developments from the Tournament website, Facebook page and twitter feed.

As well, the CHSS Twitter Feed will offer up more background on the Rainmaker preparations for their trip south.

The Charles Hays Senior Boy's are not the only team to be looking for a run at Provincials.

This week the Junior Girl Rainmakers take to the Court in their tournament at Langley. Their first game comes up on Wednesday against the number one ranked Lord Tweesmuir

Our page dedicated to their travels in the Fraser Valley will launch tomorrow.

To warm you up for tournament time, you can review the road to Langley from our archive page here.