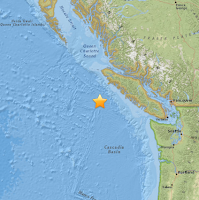 Another shift of the land on the active fault line off the coast of Vancouver Island this morning, with a 4.4 magnitude temblor recorded at just before one o'clock this morning.

The quake which was centre 190 kilometres west of Tofino had a depth of 19.96.

No reports from the Tofino area were received, indicating that few if any in the area would have felt the latest seismic shift.

The seismic event is the latest to rumble up and down the Pacific Coast plate that runs adjacent Vancouver Island and up to Haida Gwaii and beyond into Alaska.

A little over two weeks ago, two small quakes were recorded off the North Coast of Vancouver Island between Port Hardy and Haida Gwaii.

You can review some of the past notes over the last year from our archive page here.
Posted by . at 11:05 AM