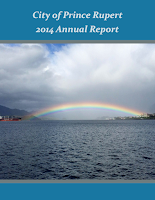 One final bit of work related to the City of Prince Rupert's budget process is about to come to an end, with the City heading into the final week for comments directed towards the final version of their Annual Report.

As we outlined during a previous council overview, the process of accepting comments was extended this year after a Committee of the Whole Council session in July, that after a sharp eyed contributor to the public comments session of that gathering noted that the City had not advertised the request for public input into the process.

Over the last few weeks, ads were purchased through the weekly paper to notify the public that the Annual report is available for review and commentary, should anyone in the community have something to add to the discussion prior to Council's acceptance of the report in its final form.

Interestingly enough, to this point, the process of notification for the public outlining the approaching deadline hasn't made it as far as the City's website or the various social media platforms that local politicians have been making much use of over the last year.

The written comment submission period comes to an end in one week's time at 4 PM, August 14th, with any comments or concerns to be directed to the City's Financial Officer, Corinne Bomben, c/o City Hall, 424 3rd Avenue West, Prince Rupert, B.C.

Or you can reach Ms. Bomben at corinne.bomben@princerupert.ca

The final stage of the approval process for the Annual Report, comes at the August 17th Council Session, with public comments also accepted at that time through the Committee of the Whole portion of the night's proceedings.

Following that opportunity for public comment, Council will then vote to accept and approve the Annual Report.

The 2014 Annual Report offers up an overview of the work of the various City departments, a checklist of sorts of some of Council's past Strategic planning and the progress of those initiatives, as well as the final financial information from the City's Finance Department.

The Annual Report is available for your review at City Hall or through the City's website here.

For more items related to discussions from Prince Rupert City Council see our archive page here.
Posted by . at 8:55 AM