As the members of the Prince Rupert Rampage shake off some of that summer rust in preparation for the upcoming CIHL season, the Rampage ticket office is getting pretty pumped about the home schedule for the squad which features eight regular season home dates, all of them a Saturday game with the exception of a Sunday evening match in October.

Last week, the Rampage posted an update to their Facebook page to reveal the home schedule for the year ahead.

The puck drops at a new home season at 7 PM on October 3rd when the Williams Lake Stampeders come to town, followed by the Quesnel Kangaroos one night later.

The Kitimat Ice Demons make the first of their two trips to the North Coast on October 17th, they return to the Jim on December 12th.

The Terrace River Kings also have two dates circled on the calendar for a Rupert road trip, the River Kings first game comes up on October 24th, they bring the Rampage regular  home season to a close with one more trip to Rupert on January 9th.

November 7th marks the only appearance of the regular season in Prince Rupert for the Lac La Hache Tomahawks, while Smithers also has but one trip to the North Coast to pack for this year, a December 19th appearance.

The first road game of the year for Prince Rupert comes up on October 10th when they travel to Terrace to take on the River Kings.

A trek to Kitimat also comes up in October, when the Rampage take on the Ice Demons at Tamatik on October 16th, part of a home and home weekend.

The CIHL has yet to update its website or post the full schedule for all teams for the 2015-16 season.

Tickets both single game and season packages can be picked up at Farwest Sports, Oceanside Sports, Stuck on Designs, Northern Savings and Rupert Cleaners.

The full home Schedule from start to finish can be found below: 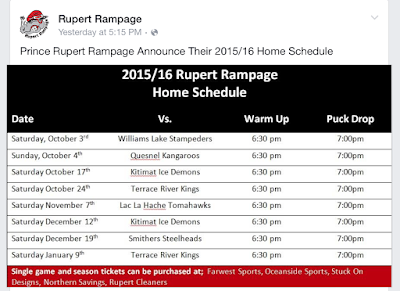