Burgers with a side of politics for Prince Rupert

The wait wan't too long and the numbers in attendance still made for a steady pace on the assembly line, as the Northwest's two senior politicians hosted a Community BBQ Thursday afternoon at Mariner's Park.

The annual summer event, was held this year to benefit the Kaien Island Anti-Poverty Society, with donations through the lunch hour event destined to help that group with its programs on the North Coast.

And while the clouds offered up a prospect of a potentially wet affair, the rains held off during the event, with the sun even making the occasional effort at breaking through the overcast skies.

MP Nathan Cullen and MLA Jennifer Rice hosted Thursday's event, dishing out burgers and a bit of politics on the side as North Coast residents dropped by over a two hour period to offer up their encouragement, or ask a few questions from the federal and provincial NDP politicians.

For the much travelled Ms. Rice, the Thursday BBQ provided for her first public event in Prince Rupert since the end of the Special Legislature session in Victoria in late July. And judging by a quick review of some of those gathered at Mariner's, a few of those in attendance took advantage to speak with the MLA on a range of items.

The BBQ while specifically noted as a charity event, also provided for the first campaign stop in Prince Rupert for the NDP's Nathan Cullen, with the incumbent MP for Skeena-Bulkley Vally now on the campaign trail as part of the 11 week marathon that will be the 2015 election campaign.

And while some in the region perhaps may not be on the same page as Mr. Cullen on some of his political goals and directions, when it comes to his culinary skills behind the BBQ, Thursday offered up no complaints from those that were lined up for their lunch time meal.

Mr. Cullen's stopover in Prince Rupert was part of a larger tour of the region, with the MP making note of his stop in Lax Kw'alaams of Wednesday through his twitter feed. 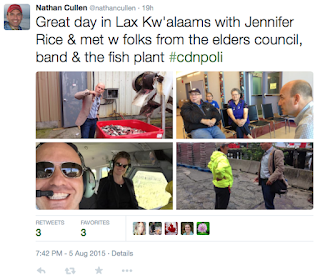 In addition to well wishers and the inquisitive public, some of the media collective of the North Coast were on hand, with Mariner's Park dotted with CBC Radio signs and CFTK's Prince Rupert based reporter Christa Dao setting up for interviews with the two politicians.


You can follow Mr. Cullen's progress on the campaign trail from our Election 2015 Archive page, while notes on the North Coast MLA's work in Victoria can be found on our Legislature Archive Page.