The Human Resources department at City Hall continues to be the place to be, as the City continues on with its ongoing efforts to add to the work force in various City departments.

The latest job opportunity to be posted on the City's employment website has issued the call for Project Coordinator, a full time staff position that will work under the mentorship  of the Director of Operations and work closely with the City's Operations Managers.

The new position will be part of the leadership team at the Engineering and Public Works Department and offers the opportunity to be involved with all aspects of the City's Public Works operations.

The full job advertisement can be reviewed below, the deadline for those interested in applying for the position is August 21st. 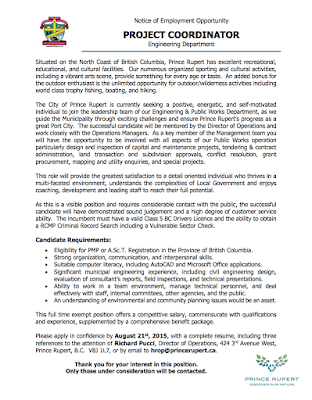 Also, facing a deadline this month are a number of other City positions recently posted to the City's employment notices, among those opportunities are:

Also listed is the position of Golf Course Superintendent, with no closing date listed

Since April of this year, the City has posted at least fifteen positions ( most likely more as multiple openings were noted for some postings) for those looking to join the civic workforce.

Some of the career opportunities were for staff positions, with others are included as part of the CUPE bargaining unit with the City of Prince Rupert.

While some of the positions were listed as casual, the majority of those listed since April however have been of a more full time and permanent nature.

Since those positions were posted however, no background information or announcements have been provided by City Council, offering up as to how many of the positions have been filled, or who may have been selected to fill the publicly posted job opportunities.

Some snapshots of previous job opportunity announcements can be found below:

Email ThisBlogThis!Share to TwitterShare to FacebookShare to Pinterest
Labels: More job opportunities with the City