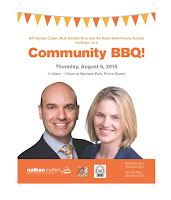 An opportunity for North Coast residents to catch up with their two high profile elected representatives comes up tomorrow, as MP Nathan Cullen and MLA Jennifer Rice are hosting a Community BBQ at Mariners Park.

The event starts at 11:30 AM and continues on through to 1:30 PM, co hosted by the Kaien Anti-Poverty Society.

The two hour lunch time get together offers a unique chance for North Coast residents to ask some questions and learn more about the two politicians who have been in the news recently in the Northwest.

Mr. Cullen of course is now on the campaign trail, as the eleven week election preamble moves firmly into its first week. The Thursday stop over in Prince Rupert providing the first chance sine the election call for local residents to have an opportunity to ask the MP any number of questions on issues that affect the region.

The NDP have been faring well in recent polling, so with the possibility of an election of an NDP government in October, North Coast voters can measure up some of Mr. Cullen's recent talking points to see if they mesh with how they might want to see the nation governed.

Ms. Rice has also been part of the news cycle in recent weeks, mostly through her commentary on the LNG file with her recent  absence in the Legislature for the final vote on the LNG Agreement with Petronas of some interest to local residents.

Her appearance on Thursday at the Community BBQ provides a chance for those in the riding to grab a few moments with the MLA to discuss her commentary during the LNG debate and offer up some feedback on her work on North Coast issues in Victoria over the last eight months.

For some background on the work of both over the recent months, see our archive pages below:

From the House of Commons

Email ThisBlogThis!Share to TwitterShare to FacebookShare to Pinterest
Labels: Cullen and Rice to host BBQ Thursday