Lelu Island is a focal point for many, for a number of reasons 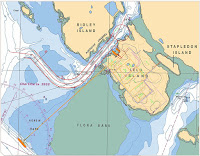 The last seven days have seen Lelu Island take the to the forefront of discussion on a number of themes.

For Pacific NorthWest LNG, the week brought some early investigative work on the island, the required preamble for any future development of the site as an LNG terminal location.

While for some in the First Nation community of Lax Kw'alaams, that step in the Lelu  process was a call to action, as well as an indication that events on the island are playing a larger role in what appears to be ongoing differences with the current Band Council government.

On the development front, Pacific NorthWest LNG outlined what is currently taking place when it comes to any movements planned for the proposed LNG terminal site. Offering up a synopsis of some of their plans though a string of observations to a number of news outlets

In the publication Business in Vancouver, Michael Culbert of Pacific NorthWest LNG is reported to have suggested that another modification to the the suspension bridge proposal is one possible solution that the company is exploring, however through the course of the BIV article, Pacific NorthWest LNG seems to rule out any actual site relocation for the project.

As well, the Vancouver Sun has reported that the company is also investigating the possibility of transplanting eel grass from Flora Banks.

The article notes that Pacific NorthWest LNG has engaged two world leading restoration scientists on that proposal. With the company now offering the concept to area First nations and DFO officials as a new an option for addressing concerns related to the project location.

On a more local level, Pacific NorthWest LNG also explained some of its current exploratory plans though a post on their Facebook page last week. 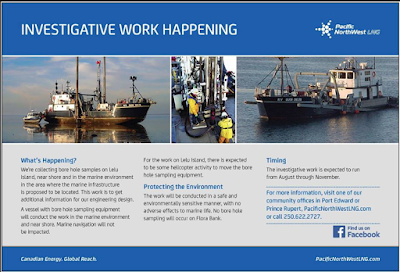 With those developments as a bit of the backdrop to the current story, some members of Lax Kw'alaams , continue to set up their base of occupation on Lelu Island. Entrenching their claim to the island related to their aboriginal rights and title, while also expressing their concerns over the nature of any Pacific NorthWest LNG work on the proposed site.

The environmental group Skeena Wild posted a You Tube video last week that  provided a review of what the current occupation of Lelu Island is all about.

And while the environmental case for their efforts has been outlined fairly well, at times it appears that a good portion of that conversation related to Lelu Island also highlights some of the current and past differences found in the community between some members and the Band Council leadership.

The Band Council outlined the latest developments related to the Pacific NorthWest LNG project through an item posted to its website on August 25, that advisory noted that a protocol has been established to do investigative drilling in aid of determining an alternative site away from the Flora Bank area.

The Lax Kw'alaams Band Council also notes in its information notice, that any further discussion by the Band Council in connection with a project at Lelu Island would require extensive community meetings.

As well the Band Council highlights that further steps include consultation and a referendum for all eligible Lax Kw'alaams members, with voting by secret ballot to approve or reject such a project.

More background on last weeks events can be found below

For more on the proposed LNG development for Lelu Island see our Pacific NorthWest LNG archive page here.
Posted by . at 9:32 AM