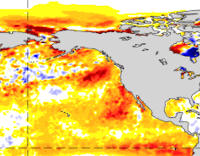 The blob, an unusual water phenomenon that has been partially blamed for some of this summer's fishing season woes is getting its own blog, hosted by the Alaska Ocean Observation Society.

The giant mass of unusually warm water along the North Pacific coast has been a prominent fixture in area waters for two years now and has become a major issue of note for scientists along the Pacific coast.

Towards the delivery of more information on just what might be happening along the coast, scientists in Alaska, working with NOAA the US organization that studies oceans and climate have been working on a number of research items to help us all try to understand the issues a bit better.

One new information system is the Alaska Blob Tracker an information blog, which provides a range of background on the evolution that has led to the blob and what conditions may lay ahead for Alaska, British Columbia and Washington State as we head into the fall and winter season.

Among some of their notes the prospect of a mild winter for the entire Alaska/British Columbia ocean regions, with a strong El Nino year projected as conditions grow stronger.

More items on the blob can be reviewed below

More on the impact of the climate on the fishery can also be round from some of our items related to the North Cost fishery found on our archive page.
Posted by . at 8:23 AM

Email ThisBlogThis!Share to TwitterShare to FacebookShare to Pinterest
Labels: Blog dedicated to the Blob