Prince Rupert perhaps received passing mention in yesterday's in camera review of alleged activities of the Canadian Security Intelligence Service, as a Federal Committee designated for oversight of the Agency explored the background of a complaint by the British Columbia Civil Liberties Association on Wednesday.

The review conducted by the Security Intelligence Review Committee is taking place over three days in Vancouver and is expected to review a number of events and incidents related to protests over the Enbridge pipeline starting from 2012.

As part of its presentation to the Review body, the BCCLA was expected to outline some background to occasions that it alleges CSIS made use of informants to keep watch on a number of gatherings across British Columbia at that time, including during the time of the All Native Basketball Tournament in the city.

In February of 2012, in the days leading up to the popular Prince Rupert event, a large protest march took place from the city's Mariner's Park to the Civic Centre.

The protest at that time, hosted by the Gitga'at First Nation, was newsworthy for a number of reasons, including the size of the crowd that took to the streets as part of a rally in the city and the opposition to the pipeline project that resonated from many of the area's environmentalists and First Nation communities.

The video below from the Friends of Wild Salmon outlines some of the theme of the February 4th protest of that year.

The review of the complaint comes from this notice from the BCCLA of February 2014, when the organization filed two complaints, one related to CSIS activities, while the other was directed towards RCMP efforts at the time.

The BCCLA alleges that both organizations illegally monitored and spied on community groups who were engaged in peaceful protest.

The hearing is not open to the public and it's not known if any report will ever be made public regarding the proceedings over the three days.

CSIS representatives have previously stated that the organization investigates and advises the government on threats to national security, though not peaceful protest and dissent.

The BCCLA updated their concerns related to the issue on August 6th with this item posted to their website, serving as a preamble to their overview of the hearings taking place from August 12 to 14.

The update provides an opportunity for those interested in the hearings to take a pledge to learn more about the proceedings and receive recaps of developments from it.

Though actual information from the closed door sessions would seem an unlikely part of their information flow, as the BCCLA has been barred from providing comments on the proceedings. 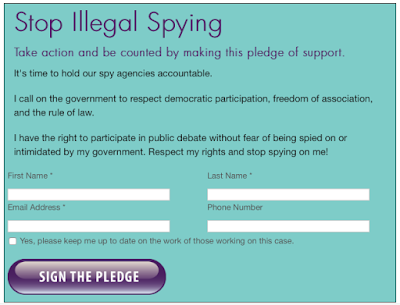 More background on the story can be found below:

A full review of the theme of the Northern Gateway Pipeline and the protests that took place related to it can be found on our archive page here.
Posted by . at 8:30 AM